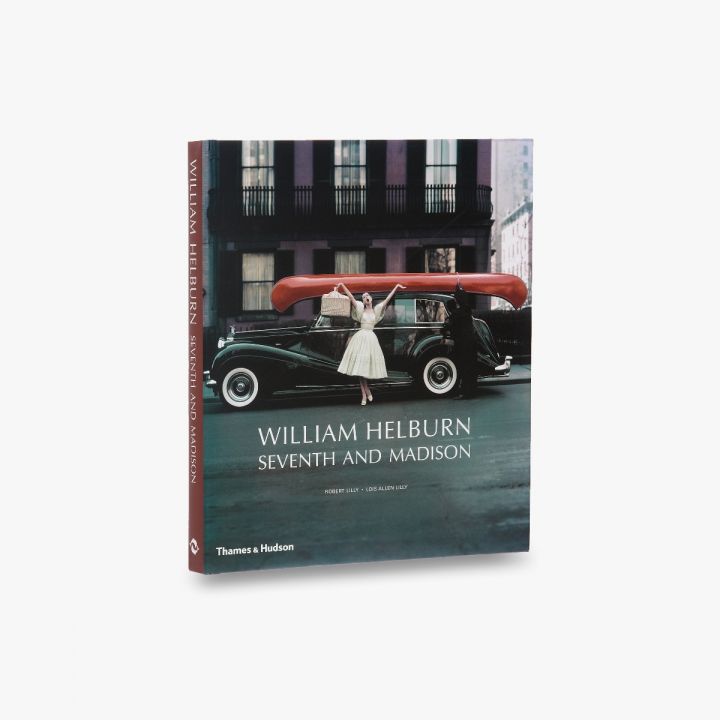 William Helburn, a quintessential figure of the ‘Mad Men’ era, was one of the most prolific and dynamic photographers of the New York school that dominated fashion and advertising from the late 1940s to the 1960s. And then he seemed to disappear. This handsome volume brings to light his magnificent career and restores him to the pantheon of postwar photographers.

William Helburn was the go-to photographer for many of the top advertising agencies in New York in the 1950s and 1960s. Doyle Dane Bernbach’s Helmut Krone considered Helburn a hero for fighting ‘the limits and style of the studio and the slowness of Kodachrome’, achieving ‘a revolution in visual methods’. As Helburnhimself said, ‘I always tried to do something different. Shock value was a term that was used. And I meant to shock people as much as I could.’ Shock value and an unrelenting hunger for success helped Helburn to a pioneer’s share in the revolutionary era of advertising. His work would also appear on the editorial pages and covers of major magazines. For Helburn, working for the top agencies was as good for a photographer as working for Vogue or Harper’s Bazaar. However, his advertising work was largely uncredited, and so he remained relatively anonymous except to those in the know at the magazines and agencies. He was the consummate insider. As he said, ‘The only way to make more money in photography was to do competitive, conflicting accounts. If you do Cadillac, Chrysler doesn’t want you. But I did both. And I did Revlon and Max Factor. But I kept it to myself.’

In addition to cars and cosmetics, Helburn shot for Coca-Cola and Canada Dry, clothing lines and airlines, cigars and cigarettes and any number of other products. He worked with the top models of the day, from Dovima and Dorian Leigh, to Jean Patchett and Barbara Mullen to Jean Shrimpton and Lauren Hutton.

Away from the camera, Helburn lived the high life: he raced his Ferrari at Sebring, Watkins Glen, Nassau and Havana; he threw annual parties where jazz greats like Count Basie and Art Blakey would perform; he cultivated his reputation as a charming rake and socialized across New York’s creative worlds at the Stork Club, P. J. Clarke’s, Gino’s, Le Cirque and Birdland; and he photographed wave after wave of the world’s most beautiful women.

William Helburn: Seventh and Madison is the first book to survey the photographic work of William Helburn. Almost all of these images have not been seen since they were first published decades ago. In addition to the photographs, Robert Lilly contributes a biographical account of Helburn’s life and work, and former colleagues – photographer Jerry Schatzberg, art director George Lois, and models Sunny Griffin and Ali MacGraw – offer insights into the creative spirit of William Helburn.

'A gloriously glamorous exploration of the work of the top advertising photographer of the 1950s and 1960s … brings the fun and colour of mid-century America to life in stylish detail. One can’t help but imagine Don Draper, cigarette in hand, just out of shot'
Daily Telegraph

'The past has caught up with William Helburn … 25 years after his retirement, the first book on his work is being published. And with it, a chapter in the history of fashion photography may have to be revised'
Observer

'There is something utterly engaging about the colours, outfits and models. A beautiful book'
Amateur Photographer

'Not only documents the perfectly glamorous type of commercial image-making that was popular at the time, it also recognises the significant contribution Helburn made to the industry through the presentation of 200 captivating colour images'
Aesthetica

William Helburn was the go-to photographer for many of the top advertising agencies in New York in the 1950s and 1960s.

For more than thirty years, Robert Lilly, a native New Yorker, has produced news programmes, stories and documentaries from Europe, the Middle East and the Americas for companies including NBC, CNN, VH1 and Reuters.

Lois Allen Lilly is from New York and Florida. She is a producer, reporter, narrator and intellectual property specialist.