Drawn from the British Museum's rich collection, 'Places of the Mind' is the first exhibition devoted to British landscape drawings and watercolours. Here we celebrate 60 works that have never before been either exhibited or published.

John William North, 'The Old Bowling Green'. In their evocations of a rustic idyll, artists like North pre-empted the idealisation of the countryside that characterised the late 19th century. In a period of serious agricultural decline, paintings of pretty country cottages and contented peasants provided a reassuring sense of continuity and stability.

When JMW Turner died in 1851, it seemed to mark the end of a Golden Age of British watercolour landscape painting. Since then, his immersive evocations of the outdoors have been seen as the culmination of a tradition that originated in the mid-18th century, when topographical draughtsmen took a new interest in working outdoors, moving away from the classicising landscapes of Gainsborough and Claude. The extent to which this narrative has persisted is demonstrated by this exhibition, the first to be dedicated to British watercolour landscapes from the century following Turner’s death.

For all that art history has neglected watercolours of the Victorian era and beyond, the medium enjoyed enormous popularity throughout that period as both a pastime and a commodity. As the middle and upper classes explored a landscape made newly accessible by the introduction of the railways, 19th century artists both amateur and professional took to heart John Ruskin’s entreaty to ‘go to Nature’, reproducing it in painstaking detail and often painting en plein air.

New societies, some of which were dedicated to watercolour landscapes, provided opportunities for artists to show and sell their work in a market buoyed up by a growing tourist industry. Ambitious, large scale renditions of Britain’s most scenic places were popular with a new breed of wealthy industrialist, competing with oil paintings in both size and grandeur. For less affluent collectors, watercolours provided a means to acquire fashionable paintings at a fraction of the cost of oil paintings.

Taking its title from a 1949 book of essays by the critic Geoffrey Grigson, this exhibition explores the stylistic and interpretative range of watercolour landscapes from the period 1850-1950. Grigson’s remark that landscapes are ‘places of the mind’ provides a thread of continuity, with highly finished Victorian confections, and the dreamlike and sometimes imaginary landscapes of Henry Moore, linked by their powerful sense of place.

In a century of upheaval, with the railways, industrialisation and war posing threats of all sorts to the British countryside, landscape painting served as a vehicle for individual responses to change, reflecting the nuances and tensions of a society in flux. From celebratory Ruskinian treatments that perceive the divine in nature, to scenes like Helen Allingham’s Cowdray Cottage, an imagined but persuasive rustic idyll, in this exhibition landscape painting emerges as an emotional, even spiritual response as much as an impression of observed reality. This is nowhere more evident than in paintings produced in response to conflict, from the Crimean War of 1853-6, through two world wars. Just as the ravaged landscapes of the Western Front became for several artists a metaphor for the human cost of World War One, so the subdued palette and sense of ceaseless movement in Paul Nash’s drawings of the sea evoke his troubled state of mind in its aftermath. Painted at Dymchurch on the Kent coast, Nash was fascinated by the stark linearity of the concrete sea defences there, which in their contrast to the unruly sea appealed to his keen sense of the uncanny.

Paul Nash, 'The Wanderer'. Paul Nash imbued trees with an almost human presence, and landscapes like this one are characterised by a dreamlike sense of unreality.

In the years following the Great War, the landscape, seen increasingly through a car window, took on new imaginative possibilities for artists like Paul Nash and Henry Moore. A sense of loss, and a collective nostalgia borne out of the trauma of war fuelled the conservation movement of the 1930s, and with it a renewed interest in the ancient history contained within Britain’s contours, barrows and standing stones. Influenced by surrealism, Moore and Nash both explored the possibilities of a landscape rooted in the mind, with strange objects inspired by prehistoric monuments inhabiting real and imagined landscape settings.

If Victorian artists had generally dealt with the hardships of rural life by idealising it, 20th century responses were more varied. Ben Nicholson’s experiments with modernist constructions of space overwhelm the sense of place in his Cornish paintings, in contrast to Peter Lanyon’s brooding evocations of the tin mines. Other artists, like CRW Nevinson and Edward Wadsworth shifted the emphasis away from the countryside, focusing instead on the modernity of industrialised and urban landscapes.

Ambrose McEvoy, 'River Landscape'. From the 1890s, the highly finished watercolours favoured by previous generations of painters had been superseded by a looser, ‘sketch’ aesthetic, heavily influenced by Impressionism.

The meticulous technique favoured by Victorian painters had by the 1890s given way to a looser, ‘sketch’ style influenced by Impressionism and typified by Whistler’s novel experiments. At the same time, watercolour was increasingly linked to a specifically English aesthetic, with masters like Turner cast as the forerunners of Impressionism. When in the years after the First World War, painters like Eric Ravilious and Paul Nash adopted a more restrained, linear style it in turn seemed strikingly modern. Nevertheless Laurence Binyon, best known today as a poet but from 1932-3 the Keeper of Prints and Drawings at the British Museum, recognised that ‘watercolour drawings’ not only presented a parallel incarnation of the ‘sketch’ but looked back to the early days of watercolour landscapes, and the topographical style of newly rediscovered antecedents like Francis Towne and John Sell Cotman. 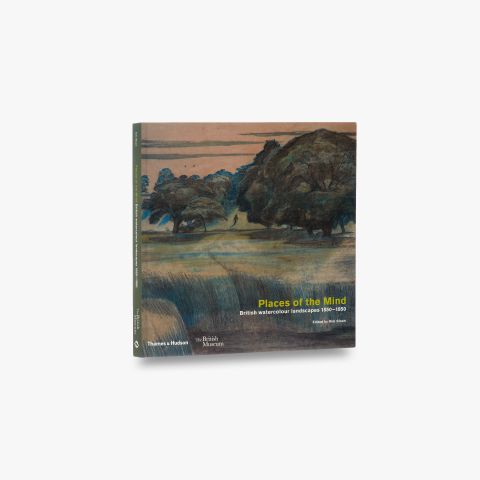 Places of the Mind (British Museum)