What happens when we look: David Campany on photography’s flux

In this essay from his book ‘On Photographs’, David Campany examines the seemingly ordinary act of looking at a photograph. Unpredictable and inscrutable, images, he argues, are anything but mundane.

Photographs are often thought of as ways to hold things still, to calm the flux of a restless world. They allow us to gaze at fixed appearances, for pleasure or knowledge, or both. But very little else about them could be described as ‘still’. From the beginning, photography’s technologies have been in a state of constant change and development, and the tasks we have given the medium have continued to mutate and expand beyond measure. Moreover, photographs are highly mobile. They move over time, across cultures and between contexts. They lose meanings, and acquire meanings. Indeed, they could not be quite so mobile were they not quite so fixed. The mute stillness of photographs permits their promiscuity and proliferation. And so, paradoxically, photographs have helped to produce the flux they promise to calm. They confuse as much as fascinate, conceal as much as reveal, distract as much as compel. They are unpredictable communicators. They cannot carry meanings in any straightforward way. A single photograph is unable to account for the appearance it describes, or even account for itself. Like Herman Melville’s Bartleby, a photograph is insistently there, yet enigmatic. In each one there is a kind of madness.

All of this leaves photography open to those wanting to take charge of it, to use it in one way or another. Broadly, there are two ways this happens. The first is to give photography pictorial conventions. Images that follow a formula are less likely to surprise, and will give the impression of meeting needs and expectations, of being ‘functional’. Through convention, photography masks its madness. The second way is to accompany photographs with words. Writing, speech, discourse Think of the complex legal system that secures the status of the police photo; or the connoisseur declaring this photograph better than that; the advertisement making claims in words for a product it depicts; the returning tourist narrating their holiday snapshots to friends; the caption for a news picture; or the photographic artist stating their intentions. The image cannot achieve any of this by itself. Words do many things for photographs, but in general they are used to oversee and direct them, the way parents supervise wayward children. Photographs can be bent to limitless wills, but never precisely so. They always have the potential to exceed the demands imposed upon them. And in that excess, photographs work upon us in ways we still barely comprehend.

If a photograph compels, if it holds our attention, it will be for more than one reason. The reasons may be unexpected, and even contradictory (mixed feelings are often the most compelling). When we are drawn to look at a photograph again and again, it is likely that our second or third response will not be quite the same as our first. Of course, most photographs do not stay in the mind for long at all, but this does not mean we can predict which ones will, or why, or whether a brief encounter with an image will leave some ineffable mark upon us. Photographs need less explanation than our responses to them.

The format of word and image sitting opposite each other on the pages of a book is perfectly familiar. Photography was presented this way almost from the start. In 1844 William Henry Fox Talbot published the first instalment of The Pencil of Nature, his remarkable account of the photographic process he had pioneered. He wrote short texts to accompany his pictures. At first glance the arrangement appeared straightforward, as if Talbot were telling readers about each image, but he had grasped that what photographs do and mean is complicated. With great foresight he understood the madness of his invention: the overwhelming detail, the world beyond intention, and the way photographs work upon our conscious and unconscious thought. At times, what he wrote bore little immediate relation to the image with which he had paired it. The reader/viewer was free to make her own connections.

Similarly, On Photographs cannot explain the various images it presents, although it is an account of how they can slip away from explanation and keep us interested. As such, it is a book concerned less with what we think about photographs than with how we think about them; and less with photographers’ intentions than with what happens when we look.

Asked who was the greatest photographer, the seasoned curator and writer John Szarkowski replied without hesitation: ‘Anonymous.’ His answer can be understood in different ways. First, extraordinary images can come from anyone, anytime, in any situation. Photography is ideally placed to take advantage of the gifts offered by the world before it. In addition, the craft of photography can be learned within a matter of weeks (although it may take a lifetime to master). This means that photographs can result almost entirely from the photographer’s disposition or attitude towards the world. The medium is perfectly welcoming to anyone who stumbles into it, just as a lens welcomes the light that passes through it.

Secondly, most photographs in daily life are consumed with little regard as to who actually made them. As well as having a deep respect for the ‘accidental masterpieces’ of amateurs and vernacular image-makers, Szarkowski admired the French photographer Eugène Atget, who worked in near obscurity in the late nineteenth and early twentieth centuries, making pictorially sophisticated documents of Paris, on commission and for his own pleasure. He became ‘Atget’, the great figure in the modern history of photography, only after he had died. Every photographer is anonymous until they are not, and every photograph is potentially a work of art, although it will never entirely cease being a document. This idea is both liberating and disturbing. Authorship and intention may be the least compelling pieces of information appended to photographs. Without them, we are at much greater liberty to look for ourselves, although interpretation can be more intense when it is undirected. The composer John Cage called this ‘response-ability’. When it is not made easy by instruction, responding to culture is difficult, but the rewards are all the richer.

Kwame Brathwaite, Untitled, c. 1966. Photo shoot at a school for one of the many modelling groups who had begun to embrace natural hairstyles in the 1960s. Photo Courtesy of the Kwame Braithwaite Archive.

While there may be something perfectly singular about any individual photograph, our visual culture is defined by numbers. Photographic images are reproducible, and often have no ‘original’. They can exist in many places at the same time, be seen by many people, and they belong wherever they are placed, be it wall, page or screen. Just as importantly, photographs are rarely made to be encountered on their own. Sets, series, sequences, photo-essays, typologies, projects, albums, archives, folders, feeds – photography is almost unimaginable outside of one kind of grouping or another. The documentary photographer takes many shots to cover a subject that escapes the single picture. The fashion photographer makes images of the collection of garments, to flow across multiple pages. Artists produce projects, or bodies of work (very few make photographs to be seen with no relation to any other). As the German photographer August Sander put it, ‘A successful photo is only a preliminary step toward the intelligent use of photography… Photography is like a mosaic that becomes a synthesis only when it is presented en masse.’ Walker Evans said something similar: ‘Photography is editing, editing after the taking. After knowing what to take you have to do the editing.’ Meaning is made as much between images as within them.

There is almost always another photograph waiting just beyond our attention span, on the next page, further down the screen, along the gallery wall, or up the street. Looking at photographs is very often a matter of displacement, from one image to the next. And yet, none of this detracts from the discrete unity of each and every photographic image. Even when put together, they are not exactly like links in a chain, words in a sentence, or even shots in a movie. Each possesses and demands at least some measure of individuality. Looking at that individuality has its own merits. It can also tell us valuable things about the flux from which it came, and to which, inevitably, it will return.

Lastly, a word about the title of this book. When I was a student, I once spent an afternoon with Susan Sontag, the essayist, film-maker, novelist and author of the book On Photography, which remains the most widely read book on the subject. I admired Sontag’s work very much, but about an hour into our conversation she asked curiously, ‘What is it about my writings on photography that worries you?’ I respected her enough to be honest. ‘You don’t have much to say about any particular images,’ I replied. ‘That’s true,’ she accepted. ‘My book is more about photography as a phenomenon, social and artistic.’ She paused, and smiled. ‘Perhaps one day you will write a book titled On Photographs.’

Extracted from On Photographs by David Campany 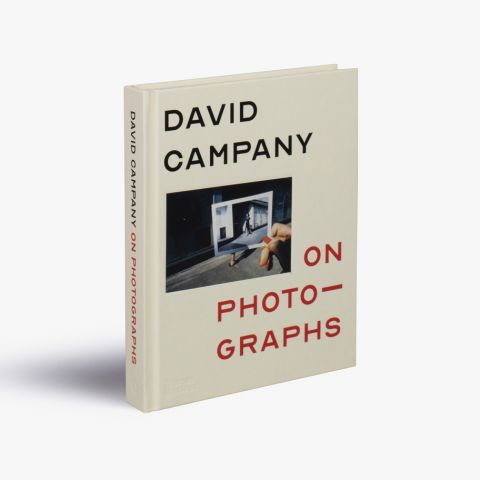