News from Nowhere: A Triumph of Book Design

The Kelmscott Press was disbanded after William Morris’s death over a century ago, but its ethos of making beautiful books accessible to all has inspired publishers, designers and printers ever since.

By the end of the 19th century, disenchanted with the mechanisation of the Victorian era, William Morris had rejected the poor quality of printing and design and sought inspiration from medieval times instead. Those ‘damned chemists’ said Morris, believing such men to have ruined 19th-century inks. He preferred a more thoughtful approach to creating beautiful printed materials: ‘I began printing books with the hope of producing some which would have a definite claim to beauty, while at the same time they should be easy to read…’.

Morris was already a leading cultural icon of Victorian Britain and an established designer by the time he founded the Kelmscott Press in 1891. His experience as a poet, novelist, translator and writer led naturally to his subsequent role as publisher and printer. But it was his firm belief in socialist philosophy that drove his ambition to create books that engaged both the maker and the reader.

Morris’s Kelmscott Press is perhaps the most well-known of the various private presses set up at the end of the late 19th and early 20th centuries by artists and designers wishing to revive the art of book-making. Morris was inspired to create his own press after hearing Emery Walker’s lecture on ‘Letterpress Printing and Illustration’ in 1888.

In his quest to revive Renaissance methods of book production and type design, Morris studied the work of early printers such as Caxton. He then went on to print illustrated editions of over 50 books (printed in over 18,000 volumes).

The Kelmscott Press produced the best possible finished books using specialist inks imported from Germany, hand-made paper recreated from a 15th-century Venetian model, three new typefaces designed by Morris (based on a Roman typeface designed by 15th-century Venetian printer Nicolaus Jensen) and three watermarks (a flower, a perch and an apple) designed by Morris for use on the hand-made paper. The Kelmscott Press also revived the traditional art of bookbinding, with covers made in vellum and precious metals.

The resulting publications were time-consuming to make but sumptuously beautiful: the Kelmscott Chaucer took four years to complete and was published as a limited edition. It was later described by the poet William Butler Yeats as ‘the most beautiful of all printed books.’

Morris’s ideas were powerful: commercial publishers, printers, type designers and illustrators were enthusiastic converts to the Kelmscott aesthetic. Although the Kelmscott Press printed what were essentially luxury items, often prohibitively expensive, and mainly read by the intellectual elite, they were vehicles for Morris’s radically important socialist messages. News from Nowhere – his utopian vision of the future, published by the Kelmscott Press in 1890 – is as relevant today as it was over a century ago.

Morris died in 1896 and the Kelmscott Press was disbanded two years later. It had been the perfect showcase for Morris’s vision of the ideal hand-made book, and succeeded in glorifying books as works of art. The Kelmscott Press also stimulated the growth of the private press movement, with contemporaries such as artist and bookbinder T.J. Cobden-Sanderson and printer Sir Emery Walker joining forces to set up the Doves Press in 1901. Even before this, designers, illustrators and printers at the end of the 19th century were inspired by Morris and the Kelmscott Press to establish small presses, printing small quantities of well-designed beautiful books using traditional techniques, often with individually designed colophons and typefaces.

The Roycroft Press and the Essex House Press (founded by the architect and designer C.R. Ashbee) followed in the footsteps of the Arts and Crafts style with which Morris imbued the Kelmscott Press. Others developed Morris’s insistence on good design and illustration in order to create new styles: his influence on graphic design inspired a new generation of designers and printers, and encouraged the development of new fonts and design processes across the graphic design industry, including job printing and advertising. New designers almost always retained Morris’s determination to enforce readability, and often subscribed to his socialist vision too: the Ashendene Press, led by C.H. St. John Hornby, attached much importance to the social value of beautiful yet functional printed matter that was accessible to all.

Morris devoted his final years to the printing of fine editions of books in an illuminated style. The Kelmscott Press united his love of medieval literature and socialist philosophy, seeking inspiration from a time before mechanisation. His emphasis on the importance of good design and excellent craftsmanship changed the way books would be made forever, inspiring writers, illustrators, designers and printers, then as now. 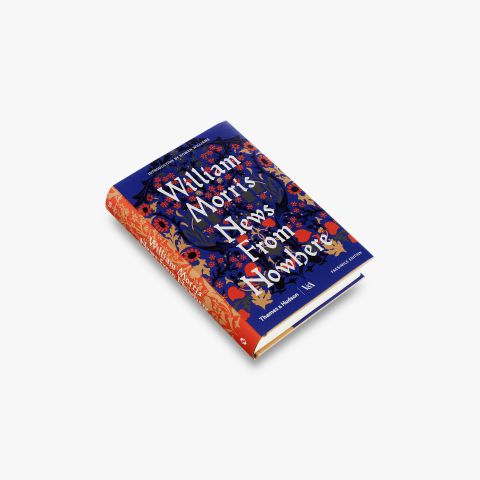