May Morris: A Remarkable Woman

Born in 1862, May Morris followed became an accomplished artist, but her life and work have been obscured: only recently has her talent been fully understood. We celebrate her contribution to art and activism.

‘I’m a remarkable woman – always was, though none of you seemed to think so,’ wrote May Morris to former lover George Bernard Shaw in 1936, just a few years before her death. This uncharacteristic assessment of her life nevertheless captures the frustration of many modern scholars and enthusiasts of her work: overshadowed by her famous father and other well-known male contemporaries, May’s extraordinary oeuvre, and life, has been neglected, until quite recently.

May was born in 1862, to Jane and William Morris. Both of her parents were intensely creative: by the time of his daughter’s birth, William Morris had already established himself as the father of the British Arts and Crafts movement, and was about to set up Morris & Co., a small-scale business specialising in design and decoration; May’s mother Jane was a talented embroiderer. Together with her older sister Jenny and a close-knit group of friends, family and outworkers, May was surrounded by artistic circles practising craft work and skills that would inspire and influence her own work, including paintings, sketches and embroidery, as well as designs for wallpapers, book covers, dress, costume and metalwork.

Following an unconventional Victorian childhood, which combined formal school studies with a strong emphasis on exploring the great outdoors, May developed a love of nature, and in particular, wildlife and flowers, which would inform her work as an embroiderer and a designer in later years. After studying at the National Art Training School (which would later become the Royal College of Art), May joined the family firm, as head of the embroidery department at Morris & Co., aged just 23. Her work became synonymous with the designs of the era: Honeysuckle, often assumed to have been designed by her father, is one of the most popular wallpapers produced by Morris & Co., and can still be bought today.

An exceptionally popular wallpaper, 'Honeysuckle' was designed by May Morris, not, as has often been assumed, her father. [Credit: c.1883 © William Morris Gallery, London Borough of Waltham Forest]

May left Morris & Co. after her father’s death in 1896 and set up her own embroidery workshop in London. She subsequently began teaching at art schools in Birmingham and Hammersmith, and also exhibited her own work in 1905 (London) and 1910 (New York). Travel, lecture tours and historical research encouraged May to try new techniques, including spinning, weaving and tapestry, in addition to developing and refining her other considerable artistic skills. Over 80 of the masterpieces she created during this period have been collected, and curated, in an exhibition at the William Morris Gallery entitled May Morris: Art & Life (which runs from 7 October 2017 to 28 January 2018) and can also be examined in detail our accompanying publication, May Morris: Arts & Crafts Designer.

Despite numerous challenging personal circumstances (her sister’s chronic epilepsy, disappointing love affairs and a failed marriage), May developed a highly accomplished career, pursued egalitarian causes and was involved in the arts throughout her life. Although she did not become a suffragette, May was active in the women’s movement, and the Socialist movement too, and was instrumental in founding the Women’s Guild of Arts in 1907. This organisation was formed to support women working in the arts and crafts, at a time when they were excluded from other similar organisations (such as the Art Workers’ Guild, which did not admit women until 1972).

May Morris was head of embroidery at the family firm until the death of her father in 1896. [Credit: Photographer unknown, May Morris, c.1890 © William Morris Gallery, London Borough of Waltham Forest]

May Morris died in 1938, her life and achievements obscured by the achievements of her father, and her role in the Arts and Crafts movement all but forgotten. Today, thanks to the substantial body of work she left behind, along with her letters, photos and the accounts of her family and friends, we can now piece together her life and work and see that she was indeed remarkable, as an artist, an activist and as an independent New Woman in her own right. 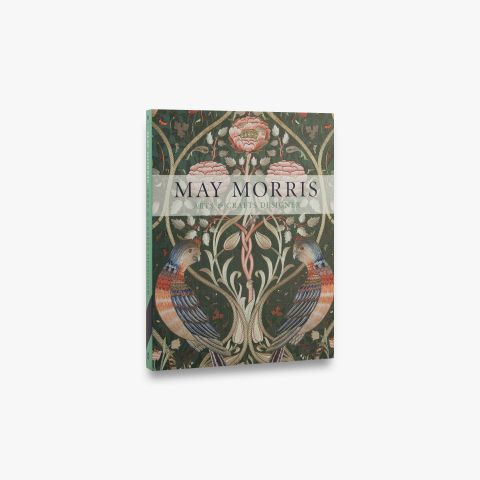 May Morris (Victoria and Albert Museum)