'Archipelago: An Atlas of Imagined Islands' is a book edited by Huw Lewis-Jones in which a truly international range of leading illustrators visualise and create their own remote islands. Explore this panoply of astonishingly creative islands in this extract.

This is the last outpost for wildlife on our planet. Welcome to the Final Ark. Gathered here on the Sagan Islands are the remnants of a world drowned by rising seas and over-population. We did not cherish our pale blue dot. Off-world representatives from all Earth countries voted in favour of building the islands after a fifth near-catastrophic extinction ravaged the planet, this time damaging the beetle and crustacean populations beyond recovery.

The islands are named for Carl Sagan. Every animal you’ve known or heard of is here, collected for your viewing pleasure. See the camel and the fennec fox, formerly of the deserts of Arabia. Get close to the wildebeest and meerkats of the African plains and watch carefully for tigers and capybara as you stroll through the reconstructed rainforest. No need to be afraid of the stories of previous times – man-eating tigers, packs of rabid dogs and wild wolves – these animals can’t harm you. The viewing experience is completely safe as all land wildlife is tranquillized for their peace and comfort. Bird sightings are guaranteed as the island boasts the only perching spot, and the seas team with fish thanks to the anti-pollution purifiers.

Perhaps you heard about the islands before you joined the shuttle life-raft Crusoe to Mars, Titan or Europa, and took your last chance to see this tiny spot of life from the window as it disappeared into the blue? Travel back to Earth to visit this tiny archipelago reconstruction of our formerly beautiful planet, north- east of what remains of New Zealand. Yes, this small collection of man-made islands is all that remains of Earth’s birds, mammals, insects and fish. You may think this is sad, but your trip will be a fun day out. Take a selfie on Bird Island – everyone loves a photo with a flamingo. Stop for lunch in our renowned café, which serves a delicious range of artificial meats and vegetables and, if you’re lucky enough to be here on the fifth of the month, you could enjoy a taste of real eggs from Sagan’s very own emu. Trinkets and souvenirs are of course available in the gift shop.

Sea mists prevented a landing at first. It was the evening of 8 September 1532 and Swedish explorer Abjörn Olofsson, who had been sent north to ink new lands on the ocean chart, was hoping for a gallant new discovery. As the crew rowed closer in their little gig boat, the soporific effect of the mists made the men fall asleep at their oars. The tide pushed them back out to sea. The following morning the island was gone, but Olofsson called it Sömnö – pronounced ‘surmn-er’ – literally ‘sleep-island’. Its precise location remains unknown for, as legend has it, access can only be gained through a maelstrom, Hecest Horrenda Caribdi, which appears intermittently in the western part of the Barents Sea, approximately halfway between Bear Island and North Cape in northern Norway.

Despite its mysterious location various descriptions of the island have been left by sailors marooned there over the centuries. It takes three lunar days to walk across it from east to west; it would be significantly quicker except for the frequent and overwhelming need to stop and snooze. Foggy conditions are common, created when the warm air heated by a large meteor, hovering permanently over the island, passes over the cold rivers and sea.

Ghosts of extinct creatures, unexplained fires and ‘atmospheric disturbances’ are persistent occurrences on the island, often accompanied by an unusual sound, described by one British naval officer, Reg Nightingale, in 1936, as ‘like a half-tuned radio’. Notable landmarks include ‘The Attic’, a tree-top shack thought to have been built by the famous French aeronaut and botanist Edith Baret in 1874, and Mount Ignatious, which features a perpetually burning copse. The novelist Marmaduke Dreary included a description of the island in his Land of the Midday Moon: ‘Deep, deep into the north beyond an ocean of shadows, where the calls of extinct creatures can be heard on the wind, lies Sömnö’, though it seems his book sends people to sleep too. We are not certain anyone has ever finished it.

It all began with cats. Maybe the first cats here were sabre-toothed and truly wild, living when mammoths roamed elsewhere. If so, some must have evolved here, because cats don’t really enjoy swimming. In 1879, the good ship Marlborough disappeared and reports last placed it near the island of Lygrano. Marlborough was known to be carrying a cargo of big cats, en route to America to join a travelling menagerie. The captain and crew were never found, did they drown at sea, or were they eaten by cats? The cats roamed the island, produced cubs and thrived.

Evidence has been found of people who formerly lived on the island – a group who named themselves the Inkinobhos. In their temple there is evidence, in the form of paintings and scripts, that they released big cats saved from captivity. To this day there are reported sightings of lions, panthers, pumas, caracal with tufted ears and clouded leopards, and possibly others. There are four houses where artists and their families now live, a structure made of glass and a multi-storey house off the causeway, and the temple erected by the Inkinobhos; other structures seem to be later. A gap in the island’s history is probably the period when Statue Land was created. Some speculate Lygrano was briefly inhabited by a small group of explorers. The island is 48,270 domestic cats long by 39,786 cats high (approximately), although there is no official measurement, or enough cats to line up in a row to verify this.

It appears that for a time the island went back to the cats. The houses were in need of much repair when the artists and their families arrived. Some brought their pets; Bunk was the first domestic short-hair cat. Days are spent working the land and creating in the studio. As for the very large old washed up hat in the centre, there is much discussion as to its origins. The initials P. N. are etched into the leather. Who do they belong to? And why is it here? The only rules on Lygrano are that jobs are shared – growing vegetables, brushing the horses, cleaning the studio – and that everyone is respectful towards each other, and of course, the cats.

Evidence suggests that Pytheas and his men landed on Xlibris after being blown off course during their circumnavigation of Britain. The existence of roughly hewn columns points to an extended stay, perhaps because their ship needed extensive repairs. A poorly constructed city wall shows that Romans may have been here too, but the island’s recent history begins with a boy named Ulysses, who absconded in a borrowed shing boat from Arranmore. His father went in search of him and finally found him on this island, not marked on any of their maps, curled in a scrap of sail. The remains of his boat lay in the charred embers of a small fire, and he was clutching his beloved copy of the Odyssey, which he had refused to feed to the ames.

The legend of the ‘Boy Who Loved Books’ spread quickly. Almost immediately the story inspired adventurers young and old to travel to the island. They would always bring books as gifts to the memory of Ulysses. After months, then years, the island was covered with cairns of books, but interest in the story faded over time, like a lost echo. In 1979, during a visit to the Shoe Lane Library in London, an American student named Maggie Lucille stumbled upon an early description. She then spent the last of her money chartering a boat and discovered a land devoid of people but littered with books. Lucille wrote a hastily scratched letter to a rich uncle in Dubuque, Iowa, and sent it back with the chartered boat. She has never left the island.

Lucille’s rich uncle was Marty Six, a daredevil Hollywood stuntman whose attempt to reach the North Pole by hand-made rocket left him famous, but paralysed. Facing a public hungry for his memoirs, but disenchanted with the publishing industry status quo, Six abruptly decided to start his own book fair on the island his niece had rediscovered. His book was a bestseller and he used the profits to help Lucille turn the island into one large bookstore. She paired different locations with different book genres. Today the island has become a bustling centre for book tourism, and has since gained acclaim for being the largest book- store – and the only bookstore island – in the world. 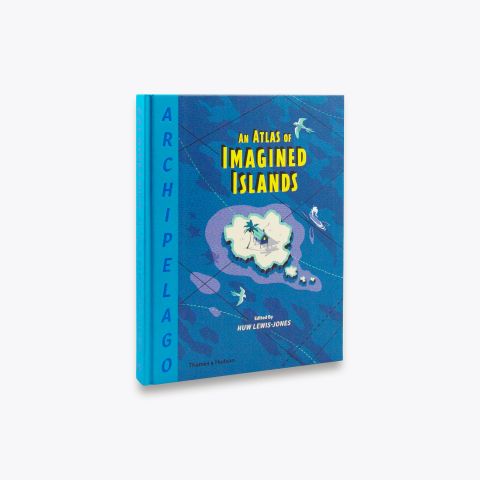 Archipelago: An Atlas of Imagined Islands