The Writer's Map - Read an Extract

Robert Macfarlane reflects on his cartophilia in an extract of the new book bringing together writers' thoughts on the geographies they describe and the wild landscapes of their imagination.

X marks the spot! Stevenson drew his original map as a diversion for a child one wet Scottish summer, and from it his book 'Treasure Island' sprang to life. As he drew, it is as though the pirates began crawling out of the map, Long John Silver with his cutlass between his teeth.

Maps have the power to transport us, filled as they are with wonder and possibility. In The Writer’s Map: An Atlas of Imaginary Lands a team of internationally acclaimed writers and illustrators share their personal insights, encompassing not only the maps that appear in their books, but also the maps that have inspired them and they create in writing.

Edited by Huw Lewis-Jones and with a prologue by Philip Pullman, there’s much to explore. In the below extract, writer Robert Macfarlane discusses the influences maps have had on his work.

IN THE BEGINNING was the map. Robert Louis Stevenson drew it in the summer of 1881 to entertain his twelve-year-old stepson, Lloyd Osbourne, while on a rainy family holiday in Scotland. It depicts a rough-coasted island of woods, peaks, swamps and coves. A few place names are marked, which speak of adventure and disaster: Spyeglass Hill, Graves, Skeleton Island. The penmanship is deft, confident – at the island’s southern end is an intricate compass rose, and the sketch of a galleon at full sail. Figures signal the depth in fathoms of the surrounding sea, and there are warnings to mariners: ‘Strong tide here’, ‘Foul ground’. And in the heart of the island is a blood-red cross, by which is scrawled the legend ‘Bulk of treasure here’.

Stevenson’s map was drawn to set a child dreaming, but it worked most powerfully upon its grown-up author, inspiring Stevenson to write his great pirate novel, Treasure Island. Poring over the map with Lloyd, he began to populate his landscape with characters (Long John Silver, Captain Flint, Jim Hawkins), and to thicken it with plot. Up from that at page sprang one of the most compellingly realized of imaginary places. Countless children have made landfall upon its blonde beaches, moved cautiously through its grey woods and seen sunlight flash hard upon the wild stone spires of its crags. Once visited, the island inhabits you.

Like Stevenson I am a cartophiliac, and because of Stevenson I am also an islomaniac. I have gone on to write near-obsessively about both maps and islands in a series of books. Islands fire my mind in part because they conjure the delusion that one might know everything about a single place. Maps fire my mind in part because they offer – in travel writer Rosita Forbes’ smart phrase – ‘the magic of anticipation without the toil and sweat of realization’.

Maps give you seven-league boots, allowing you to cover miles in seconds. On a map, visibility is always perfect. Tracing the line of a walk with the point of a pencil, you can float over gorges and marshes, leap cliff-faces at a single bound and ford spating rivers without getting wet. My father taught me at a young age how to read maps, such that landscapes would rise magically out of them. A snarl of contours became a saw-toothed ridge or gouged corrie, or a break in the hachures through which sneaked a blue stream-line implied a sea-cove on which we might safely land a rowing boat.

After reading Stevenson, I sought out the work of other island-writers: William Golding’s Lord of the Flies, John Fowles’ The Magus, and D. H. Lawrence’s extraordinary The Man Who Loved Islands, set on a nameless islet four miles in circumference, with two hills at its centre, gorse and blackthorn scrubbing its rocky fields, and cowslips thronging the verges.

I began to devise and map my own ideal islands. There was a black-rock skerry somewhere in the North Atlantic, in whose lighthouse I would over-winter and around which, during the biggest storms, vast waves would whitely fold. There was a limestone island with a prolific spring-line, ilex forests and a network of sea-caves in which the water showed lapis-blue against the bone-like stone that enclosed it. There was a clichéd castaway atoll, with a copiously fruiting coconut tree and a lagoon that teemed with catchable fish. Common themes began to emerge, I now see: self-sufficiency, extreme isolation, time in abundance – the unmistakable signs of adolescent utopianism at work.

The paper had been sealed in several places … The doctor opened the seals with great care, and there fell out the map of an island, with latitude and longitude, soundings, names of hills and bays and inlets, and every particular that would be needed to bring a ship to a safe anchorage upon its shores.

Maps start a journey for so many authors, and artists too. This is a version of Stevenson’s classic illustrated by Monro Orr in 1934. 'Treasure Island' has now been reworked and recreated many times.

WE ARE NOW habituated to regard cartography as a science: an endeavour of exacting precision, whose ambition is the elimination of subjectivity from the representation of a given place. Such a presumption is hard to set aside, for we are accustomed to trust maps, to invest confidently in the data with which they present us. But before it was a field science cartography was – as Stevenson knew and proved – an art. It was an art that mingled knowledge and supposition, which told stories about places, and in which astonishment, love, memory and fear were part of its projections. It is instructive to consider these earlier, artistic forms of mapping, for they exemplify neglected ways of proceeding within a landscape.

Broadly speaking, we might say there are two types of map: the grid-map and the story-map. A grid-map places an abstract geometric meshwork upon a space, a meshwork within which any item or individual can be co-ordinated. The invention of the grid-map, which occurred more or less coevally with the rise of modern science in the sixteenth century, introduced a whole new power to cartography. The power of such maps is that they make it possible for any individual or object to be located within an abstract totality of space. Their danger is that they so reduce the world to data that they record space independent of being. Everything can be located, fixed, plotted and tracked. Everything can be grid-locked.

Story-maps, by contrast, represent a place as it is perceived by an individual or by a culture moving through it. They are records of specific journeys, rather than describing a space within which innumerable journeys might take place. They are organized around the passage of the traveller, and their perimeters are the perimeters of the sight or experience of that traveller. Event and location are not fully distinguished, for they are often of the same substance. An example might be the portolan charts of fourteenth-century Mediterranean cultures. ‘Portolan’ means pilot, and these maps were developed for the use of navigators, usually Italian merchants, who rarely ventured out into the open sea but hugged the coastlines in their journeys between ports. Early portolan maps thus tended to show only the edge of the land and the sea adjoining it, rather than locating these itineraries within a broader frame.

Before this newly rigorous cartography, the more impressionistic and itinerant mapping practices of pre-scientific cultures quickly fell back. By the late eighteenth century, the potency of this new form of mapping was so evident that the two young republics of that era – America and France – founded themselves geographically upon its principles. Recently boosted by the arrival of advanced computational technologies, the grid-map has proved an ultra-efficient method for converting place into resource, and for devising large-scale approaches to a landscape. It is a technique of representing the world that has brought uncountable benefits, but so authoritative is its method, so apparently irrefutable the knowledge which it dispenses about a place, that it has all but eliminated our sense of the worth of map-as-story: of cartography which is self-made, felt, sensuous.

A detail from a portolan chart by Bastian Lopez, dating from 1558, with the River Amazon curling its way into an unknown interior. Invented by mariners, portolans were based on direct observation and made for taking to sea.

Cultures that grow up in close correspondence with a particular terrain often develop innovative methods of representing that terrain. In 1826, at Cape Prince of Wales in the Canadian Arctic, a British naval officer encountered a hunting party of Inuit. Unable to communicate directly with the officer, but comprehending his desire for orientation, the Inuit created a map on the beach, using sticks, stones and pebbles ‘in a very ingenious and intelligible manner’ to build a scaled replica of the region. The Inuit people are also known to have carved three-dimensional maps of coastlines from wood. In this way, the maps were portable, resistant to cold, and, if they were dropped into water, would float and could be retrieved. Inhabitants of the Marshall Islands used sticks and shells, bound together with plant fibre, to create similarly buoyant accounts of the ocean currents which ran between the islands of their archipelago.

The Inuit have also developed a portfolio of sky-maps and cloud-atlases; a knowledge of the moods of the sky so precise that it allows them to infer the quality of the ice beneath the clouds, as well as future weathers. The Koyukon people of northwest interior Alaska developed superbly intricate ways of mapping their landscape through story. To the Koyukon, the landscape was so filled with memory and event that they navigated themselves through it by telling stories, by plotting up details and memories into the form of a spoken map. Narration was their navigation.

To contemplate such ways of mapping is to understand something of what the grid-map leaves out. In such maps, human memory and natural form recoil into one another. Carried in the head, story-maps are infinitely exible, always available, and invulnerable to the tattering powers of wind and rain. They are deep maps, too, which register the past, and acknowledge the way memory and landscape layer and interleave. They are living conceptions, idiosyncratically created, proved upon the pulses of a place.

We would do well to recall these dreamed maps, these felt maps – for they are born of experience and of attention. Such maps, held in the mind, are alert to a landscape’s changeability as well as its fixtures. They tell of the inches and tints of things. They offer knowledge that might be found, as it were, off-grid. And they are sensitive to the mysterious fourth and fifth dimensions of cartography – the relationship of mapmaker to landscape, and the relationship of map-reader to map.

For as long as I can now remember, I have been set dreaming by story-maps both real and make-believe. From Stevenson’s sketch of that treasured island, to the fold-out map of Mount Everest and its attendant peaks that concertinaed from the back of my grandfather’s copy of Edward Norton’s The Fight For Everest: 1924, to the map of the Suffolk coast that forms the endpapers of the German edition of W. G. Sebald’s The Rings of Saturn, through to the ‘fantastical field guides’ written by two- and three-year-olds exploring the woods and meadows of a country park near my house in Cambridgeshire: these are among the many maps that have, over the years, set my feet moving across the land and my pen moving across the page.

The Writer’s Map: An Atlas of Imaginary Lands is out now.

All Rights Reserved. With thanks to the British Library. 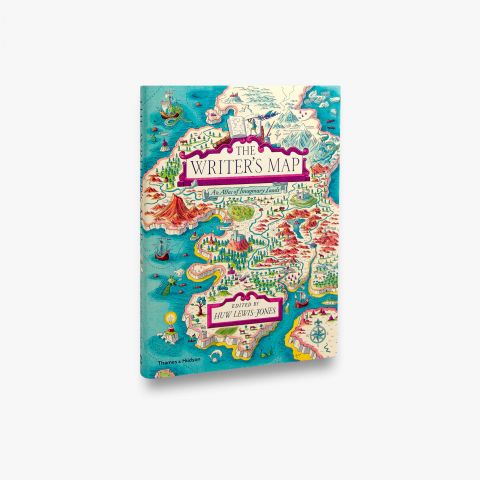