The Inspiration Behind 'Ravens & Red Lipstick'

Author Lena Fritsch joins us to discuss how her love of Japanese photography since 1945 led her to create one of the first introduction to and study of the subject to be published in English.

While major exhibitions of Japanese photography have become steadily more frequent over the last thirty years, Ravens & Red Lipstick: Japanese Photography Since 1945 offers one of the first overviews of the subject to be published in English.

Visually bold and richly detailed, this volume traces the development of Japanese photography from the severity of post-war Realism to the diversity and technical ingenuity of photography in contemporary Japan, via movements and groups such as Vivo in the 1960s and ‘girls’ photography’ in the 1990s. Interleaved are new interviews with some of the most influential practitioners in photographic history, from Moriyama Daido to Araki Nobuyoshi and Kawauchi Rinko.

We sat down with author Lena Fritsch to talk about how she developed a fascination with the subject.

When did you first fall in love with Japanese art, and in particular, Japanese photography?

My interest in Japanese art and photography is intertwined with my biography and developed naturally, over time. My mother is an ethnomusicologist and professor of Japanese studies; I picked up the Japanese language in kindergarten when we lived in Osaka for 1.5 years. After we returned to Germany, she made sure I continued learning Japanese. As a teenager I feel in love with Tokyo – what a wonderful, crazy, colourful city! 19-years young and excited about this fast-paced megalopolis, I secured an internship with a Japanese company and moved to Tokyo for six months. I enjoyed visiting exhibitions and soon decided to study art history at University. A few years later, I lived in Tokyo again, studying at Keio University and researching Morimura Yasumasa’s photographic self-portraits for my MA thesis, while also working as a TV presenter. That’s when I realized that there are many more photographic art works that I want to explore – so I did a PhD in art history, examining Japanese photographs of the 1990s.

What was the trigger for your book Ravens & Red Lipstick?

I make no claims to methodological originality, but as both a European art historian and somebody whose personal history has been intertwined with Japanese culture and language since an early age, I have attempted to interpret Japanese photography from a perspective that avoids clichés. My viewpoint is constantly shifting between a ‘Western’ distant position, and a ‘Japanese’ proximal perspective.

The title of your book derives from the confluence of two photographers’ work – Fukase Masahisa’s ‘Ravens’ series and Ishiuchi Miyako’s image of her dead mother’s lipstick. What was it that drew you to such disparate images when creating your title?

The title symbolizes the diversity of Japanese photography and of the works in my book: it stands for black and white as well as colour photography, photobooks as well as photographic prints in exhibitions, male photographers and female artists.

Ravens by Fukase Masahisa is a fantastic work that is particularly known as a black and white photobook, first published in 1986. Fukase’s photographs of ravens are expressive and symbolic, conveying a melancholic feeling. The term ‘red lipstick’ references the portrait-like photographs of old lipsticks that are part of another impressive series, mostly taken in colour, by one of the most important women artists of Japan: Ishiuchi Miyako. This personal series documents the things that Ishiuchi’s mother left behind after her death. Mother’s was exhibited as large-sized prints in the Japanese pavilion at the Venice Art Biennale in 2005. Ishiuchi has explained laughingly that she switched from black and white to colour photography because ‘a red lipstick just looks better in colour’.

Is there anything surprising you have learnt about Japanese photography while researching this book?

The sheer number and diversity of photographs keep surprising me. They defy categorization by any ‘national aesthetic’. Photography in Japan has grown into an unparalleled industry and socio-cultural world, with camera companies, photography clubs, journals, galleries and competitions. This ‘photography world’ has produced a vast number of interesting images!

How did you go about the process of choosing the photographers that you wanted to include?

My selection of photographers and images is based on their art- or photo-historical relevance, as well as my subjective taste and the book design. Two research principles have been paramount: an awareness of my own cultural perspective, and continuous interaction with specialists and artists in Japan. A major part of this publication is therefore the dialogue with photographers: 25 interviews, conducted mostly face-to-face in Japan, represent the photographers’ voices.

Who were you most excited to interview for the book?

I was particularly excited to interview Hosoe Eikoh (b.1933), and Suda Issei (b. 1940). I love both photographers’ work and had never met them before. It was fascinating to hear from them about photography in the 1950s and ‘60s. Hosoe still remembers many details and is a great story-teller. Last week when I was in Tokyo, I heard that Suda-san doesn’t give interviews anymore, due to an illness. I’m so glad that I could meet him and his wife in 2016. We enjoyed a fun memorable afternoon together in a tiny café called Kanda-Coffee-En, built under railway tracks.

Every interview was really exciting though and I would like to thank all photographers and photography specialists, curators and gallerists who have shared their precious time.

Is there an up-and-coming photographer that you think we should keep an eye out for?

Oh, there are many. In my book I have included Shiga Lieko (b.1980) and Yokota Daisuke (b.1983), who both present a refreshingly experimental approach while creating poetic and somewhat mysterious photographs. I would have liked to include many more photographers but ran out of space. For example, I did not feature the work of Nishino Sohei (b.1982), or Ayano Sudo (b.1986) – keep an eye out for them!

Ravens and Red Lipstick: Japanese Photography Since 1945 by Lena Fritsch, published by Thames & Hudson, is out now. 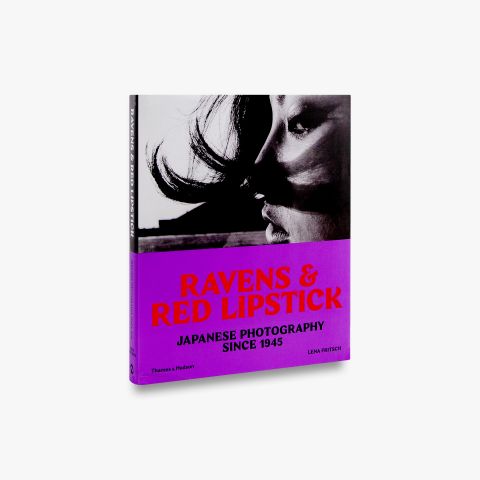