The innovative alphabets of Takenobu Igarashi

As a small boy, Takenobu Igarashi was fascinated by Hershey’s chocolate bars. His interest was not so much in the sugar rush, but instead in the bold letters of the chocolate wrapper. “They emanated a magical shine that captured my young heart,” the cult designer recalls.

Igarashi was born in Tagikawa City, Hokkaido in 1944, just a few months before Japan’s defeat in World War Two. His childhood was imprinted by the visuals of a victorious America – its colour, its abundance – and its alphabet. The twenty-six Roman letters came to merge, in young Igarashi’s imagination, with dreams of freedom and the future.

Like most Japanese people, Igarashi used four forms of expression in writing: the fifty phonetic symbols of hiragana; the fifty-character phonetic alphabet of katakana, the vast repertoire of kanji – ideographs that vary from simple one-stroke structures to complex compositions; and romaji – the imported Roman alphabet from the West.

In this “overwhelmingly complex world of symbols”, Igarashi was drawn to the relative simplicity of the Roman alphabet and thrilled by the possibilities inherent to its shapes and structure. “The Roman alphabet, composed of basic geometric figures, has  a fascinatingly simple structure which makes even the most complex expression possible.”

After graduating from Tama Art University in 1968, Igarashi followed those early American dreams and enrolled on a master’s program at UCLA. It wasn’t the smooth transition he might have hoped for. “I got a big cultural shock,” he recalls. “I struggled with the work of changing myself.” But he met another important mentor; Professor Mitsuru “Mits” Kataoka, a pioneer of cutting-edge technology in design practice. So, too, did Igarashi use his time in the United States to deepen his connection to the Roman alphabet, as well as the ten Arabic numerals of 0 to 9, widely used around the world.

Igarashi making a plan with a drafter at his studio in Aoyama, Tokyo, 1980.

Igarashi speaks of his three-dimensional letters in terms of building. His axonometric method — guided by three axes, instead of two — allows letters to appear three-dimensional, like small architecture. The essential geometries of the alphabet – circle, triangle, and square – are the building blocks.

“The simple and clear differences between the three shapes serve as a creative language in the process of transforming thought into form. The circle as a symbol of perfection is frequently used in composition for the formative nature of a circle’s centre point. The triangle serves directly as an expression of its powerful shape; and the square, with its capacity for space, is a typical framework for design.”

It is a layered process, one that begins with concept and ends with colour: “In my design process, colour comes after form, form after structure, structure after idea, idea after concept. This does not mean that I neglect the importance of colour, but rather it expresses my desire to free colour from the constraints of design. Colour covers the surface of things and attracts the eye. It is stimulation.”

Returning to Japan from the US in 1969, Igarashi set up his own studio with some friends. In the early years, commissions were scarce, and he combined his design work with writing and editing assignments, including several articles for the Japanese magazines, Graphic Design and Katei-Gaho. Gradually, the design projects picked up, and Igarashi embarked on what is considered to be his most representative alphabet works. His lettering appeared on magazine covers, posters, and record sleeves.

Key to Igarashi’s growing success was his strategic streamlining of communications. He quickly established a PR department with English-speaking staff and furnished the office with the necessary technology to get his designs and message distributed. Certainly, the widespread recognition of his motif of choice – the alphabet – also helped his international reach.

A special feature on Igarashi in the 1979/80 edition of Swiss magazine Graphis brought his work a whole new audience. He became a member of the Alliance Graphique Internationale (AGI), and became more actively involved with designers from various countries – including Alan Fletcher and Massimo Vignelli. Now on an even footing, he began to participate in the Western graphic design he’d so long admired.

From 1984 to 1991, Igarashi worked on his famous calendar posters for the Museum of Modern Art in New York. The project included 622 individually-designed numerals to represent the 365 days of the year. Over the seven years, he designed 4,536 variations of axonometric three-dimensional numerals, based on 84 different ideas.

He also began translating his typographic work into sculptural form, further liberating the letter from its functional (communicative) constraint and into an independent materiality. “I strive to go to the edge of being legible, so that the letter starts to have an independent visual existence.”

Many of his sculptural works relied on computer technology to systemize design and standardize parts, and indeed Igarashi actively embraced technology from the off. When Apple Macintosh released its computer in 1984, he bought three computers with a five-year loan. In 1992, he edited the book Designers on Mac, which introduced designers and design companies such as April Greiman and Emigre Graphics, who had pioneered Macintosh in the industry.

Igarashi himself used his Mac to produce three-dimensional typography without having to perform simple but time-consuming tasks such as blur effects and other textures. But Igarashi was also committed to the right mix of digital and analog practice. Some of his 1987 calendars for MoMA were primarily created on computer and Igarashi found the results “not interesting.”

He later spoke of “a digital design virus”. “An intriguing characteristic of this virus is the varying effect it has on those infected. A person may react positively or negatively to the infection. Those affected negatively show severe cerebral deterioration or paralysis of the extremities. On the other hand, those positively affected show energizing signs in all the cells of the body.” He would continue to draw the core characters of his letters largely by hand.

As he gathers his work into a new publication, Igarashi finds new thoughts, images, and ideas emerging from the comparison of his works over the years. “Letters do not need thickness. My heart leaps to the challenge of creating this “non-existent thing”. Without being caught in convention, can a three-dimensional alphabet with surrounding space obtain “ma”, or space for inspiration? In the journey of making, there is no terminus.” 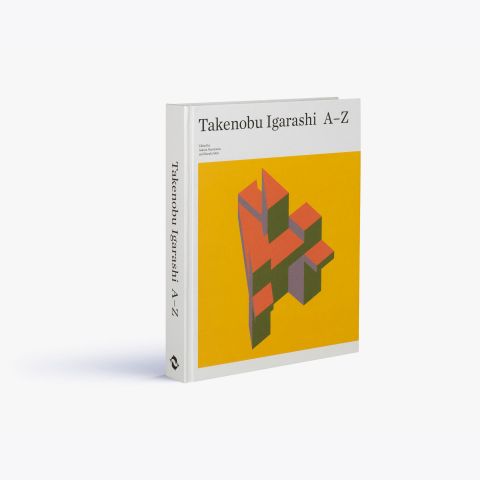 Takenobu Igarashi: A to Z

The making of an illustrator: Dick Bruna’s Miffy

Just "two dots and a little cross”, the face of Miffy is beloved by millions around the world. Here’s how Dutch illustrator Dick Bruna perfected the expressive minimalism of an iconic rabbit.
Features

Writers & artists at home: 'The Book of Pebbles'

Fancy an escape to the British seaside? We spoke to writer Christopher Stocks and printmaker Angie Lewin – creators of ‘The Book of Pebbles’ – who allowed us to peek inside their inspiring homes and socially-distant seaside retreats. They’re experts at taking pleasure in the simple things, like pebble collecting, and at bringing the great outdoors in.