Joshua Cunningham, an adventure cyclist who rode from the UK to Hong Kong, recalls epic scenery, solitude, and the generosity of strangers.

‘Travelling by bike will restore your faith in the belief that the world is a kind, safe, friendly place,’ says cycling and travel writer Josh Cunningham, author of Escape By Bike, a vivid and evocative new account of his 11-month journey from the UK to Hong Kong. ‘I was met with near unconditional hospitality throughout my journey, and it’s something that I will be forever grateful for.’ Even the wildlife, with the exception of a few food-snatching monkeys, stray, snarling mutts – and in Kazakhstan a group of wild horses – was friendly.

Of all the lessons a reader might expect to draw from such an extended voyage on two wheels, confirmation of the essential kindness of strangers is one of the most affirming, and something that can only be learnt from the extended time away from tourist infrastructure that adventure cycling provides. Many cycling writers have concentrated on the challenge to their equipment of a gruelling and distant journey, but for Cunningham – although the book contains much detailed information about the practical challenges of the journey – the essence of the journey is to experience remote places face-to-face.

Dawn breaks the chill on a shepherd's yurt where we escaped the cold, somewhere between Urgench and Bukhara in Uzbekistan. [Credit: Joshua Cunningham]

‘Cycle touring isn’t about cycling, just as Arabian Sands isn’t about camels, and Heart of Darkness isn’t about a boat,’ he explains. ‘These modes of transport are just the vehicle that makes the journey possible. While the thrill and challenge of riding is indeed a part of travelling by bike, it’s far from the primary reason why we do it.’

You see everything up close from the saddle of a bike, and Cunningham is as powerful a writer as he is cyclist. His chronicle of the 21000-kilometre journey is studded with jewel-like accounts of both sights and experiences, the vivid and gorgeous, such as the transition from Europe to Asia, riding through ‘great swathes of emptiness stretched out on either side of the road, halfway between steppe and rolling pasture; snow-capped hills and distant mosques peppered the horizon and flocks of sheep or goats, tended by a solitary figure leaning on a staff, intermittently populated the middle distance.’

He’s honest about the challenges of the journey, too, and the stress and fatigue are conveyed compellingly. He felt ‘suffocated by the unending urbanity’ of the Great Trunk Road, ‘an archetype of raw, ungoverned urban chaos’ stretching from Kabul to Dhaka. His story about being struck by food poisoning in Tajikistan is even more frank, and his description of a body in revolt is best left for the reader to discover for themselves.

Early sun takes the edge off the frost in the Spiti Valley, India. [Credit: Joshua Cunningham]

He’s also a well-read travel writer, and the book is peppered with the insights and influences of previous generations of cyclists and explorers. Ernest Hemingway’s belief that ‘it is by riding a bicycle that you learn the contours of a country best, since you have to sweat up the hills and coast down them,’ sums up Cunningham’s attitude, though he wisely adds that it’s not just about contours: ‘two wheels… provide a portal into the varied experience of life on earth.’

As travellers become more aware of the impact their presence has on local populations, Cunningham believes that ‘if a place is open for tourism, then cycle touring is quite a sustainable way of introducing it.’ Not only is the cycling part of the journey entirely emissions-free, but ‘tourers’ money often ends up in the hands of small, roadside establishments, across a wide area and range of businesses,’ he explains. He met less than 100 other cycle tourists in his whole trip, so for travellers interested in sustainability the opportunities are endless.

Cycling in Britain is undergoing a long-overdue renaissance, but media presentation tends to focus, somewhat scornfully, on the widespread ‘mamil’, the middle-aged man in lycra, a new cyclist whose unathletic physique is poorly disguised by his skin-tight get-up, and is often to be found in on an absurdly (for his level of fitness) expensive carbon bike. Escape By Bike features detailed guidance on the various types of trekking and adventure bike suitable for the different kinds of terrain he encountered en route. Cunningham is fully in favour of high-quality gear, if carefully chosen: ‘Good gear can and will often make touring easier. Having a good down jacket and comfy shorts – not to mention a reliable bike – will often free up mental space to enjoy the ride.’

But it can – and should – be done without, if that’s what circumstances dictate. ‘I remember meeting a girl in Tajikistan who had gone backpacking in China, then met a cycle tourist and was besotted by their experiences,”’ recalls Cunningham. ‘So she salvaged a rusty bike, and strapped some jerry cans to the side of it as panniers. It got her from Kashgar to Tbilisi, across some of the most testing terrain on the planet.’

Escape By Bike is packed with insight and information regular cyclists can learn from, and as a go-to guide for planning a first cycling trip, it’s invaluable. For Cunningham, however, the readers he hopes to find above all are ‘people who aren’t already cyclists, but are interested in travel and seeing the world from a unique perspective’. 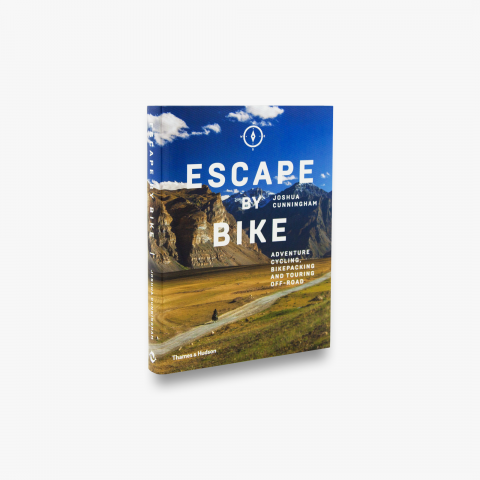