Edvard Munch: A Non-Conformist in Life and Art

Uneasy proximity or fretful distance: the figures that populate Munch’s prints form an anxious chorus around 'The Scream'.

Lurid, distorted, haunted: no figure expresses the anxieties of modernity quite like Edvard Munch’s The Scream. First rendered in 1893, the gaping face beneath a flaming sky has become a Mona Lisa for the urban and industrial age — infinitely replicated, instantly familiar, replacing La Gioconda’s coy smile with a harrowing, existential wail.

Munch’s image continues to reverberate through the decades. Its echo is felt in the work of Andy Warhol, Martin Kippenberger, Tracey Emin, Marlene Dumas, as much as in pop culture, from The Simpsons to the Scream horror movie series, from the Home Alone movie poster to the aghast and ghostly Unicode emoji.

How did this image come to dwell in our collective consciousness and what shadows and torments first brought it into being?

The show centres on a rare black and white lithograph of The Scream, created after the painted version and two drawings of the image. Though we tend to think of The Scream in livid hues, it was this black and white print, not the coloured versions, which was widely distributed during Munch’s lifetime. It was this version, not the painting, which first made Munch — and the anguished image — famous.

The 1895 print also includes a rare and revealing inscription by Munch – absent in the colour versions – which reveals the picture’s inspiration and intent. Counter to popular interpretations of the picture as a figure screaming, the English translation to Munch’s inscription reads: “I felt a great Scream pass through nature”.

As Giulia Bartrum, curator at the British Museum, describes, the artwork can therefore be viewed as “a person hearing a ‘scream’ and not, as many people continue to assume and debate, a person screaming.”

Munch was not alone in discerning a general wail at the end of the 19th century. As intense urbanization, mechanization, and a rapidly globalizing capitalism wreaked political and economic upheaval across Europe, German neurological expert Richard von Krafft-Ebing declared an epidemic of nervous anxiety across the continent.

“Millions of people who used to live a simple but comfortable life today are factory workers, depending on international trade balances… As people rush to the cities, these develop at the expense of physical and above all mental health….”

As his artistic renown grew, Munch experienced this febrile European climate first-hand, hurtling between the burgeoning metropolises of Oslo, Paris, and Berlin, the landscape blurred in rushing window views. In 1912, the artist had simultaneous shows in Vienna, Munich, Oslo, Paris, Amsterdam, and Cologne.

It was a cosmopolitan schedule, typifying the more privileged tier of fin de siècle society, but nevertheless an existence steeped in anxiety and nihilism. Both Munch’s mother and much-loved elder sister, Sophie, were among the huge swathes of Europe’s 19thcentury populace killed by tuberculosis.

The artist remained traumatized by these deaths all his life and developed a paranoia over his own health. He attested to a life-long anxiety, stating “Disease and insanity and death were the black angels that stood by my cradle.”

Idolizing Nietzsche, Munch came to excel in capturing the raw emotions heightened by this harried era. Angst, loneliness, grief, love, and jealousy became the the mainstays of his oeuvre. As this exhibition shows, printmaking allowed him to distribute his images more widely – “to bring my art into thousands of homes” – but also to intensify their emotional jolt as volume and colour compressed into iconic figures.

The eerie Vampire II (above) is considered to be one of Munch‘s most elaborate and technically accomplished prints. Tense with eroticism and anguish, it shows a man contorted forward as a woman bites into his neck. Her red hair runs down like bloody tendrils, trickling over his body and her bare white arms.

The Lonely Ones (above) captures a pair on a shoreline, their stances apart, their backs turned to the viewer, the ground at their feat as uneasy as the sea. Towards the Forest (below) shows a couple at the threshold of a forest. They clutch together, perhaps in love, perhaps in fear, their forms morphing into thick trees beyond.

Girls on a Bridge (below) returns us to a scene akin to The Scream, only this time populated by a trio of young women, all bonnet hats and pastel colours. Once again, Munch hides the figure’s faces. It’s quaint and pretty, until we realize they’re not interacting, and wonder what’s caught them so pensive, so together yet apart, by the water.

Uneasy proximity or fretful distance: the figures that populate Munch’s prints form an anxious chorus around The Scream. Though best known for his paintings, these works on paper were integral to the artist’s creative process and success. In them, he was able to revisit and intensify the uneasy emotion that characterized his oeuvre and that was his own visceral reality as much as it was endemic to the age in which he lived. 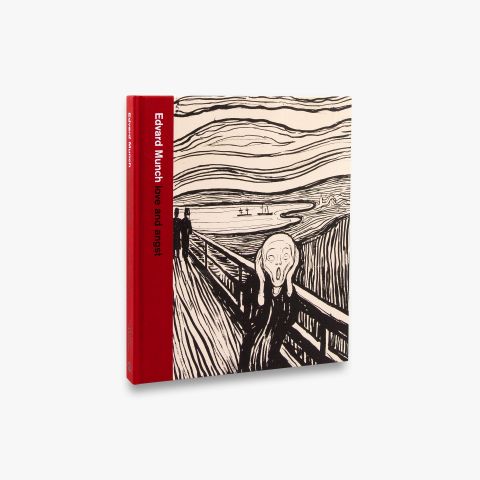