Dot on: The rise and rise of Yayoi Kusama

At the age of 92, Yayoi Kusama is the world’s best-selling female artist. But on her path to success she’s had to grapple with trauma, poverty, sexism, and frightening hallucinations.

Yayoi Kusama grew up surrounded by flowers. The youngest daughter of a successful seed merchant, she spent her childhood in Matsumoto City roaming the fields and greenhouses of the family farm. One of the earliest portraits of the artist shows her ten-year-old self framed by giant dahlias. Her teenage sketchbooks are crammed with carefully annotated studies of stalks, petals, and leaves.

For the young Kusama, the plants were much more than the stuff of family business. They spoke to her. Local animals had voices, too. In the house, colourful patterns would lurch across walls and limbs. Fabric would come to life, engulfing her body. By her teens, she experienced regular “flashes of light, auras, or dense fields of dots”.

Today, the biggest-selling living female artist is clear that it was her hallucinations that got her drawing. Only in depicting her intense visions could she escape their terror. But her decision to become an artist met fierce opposition in the family, particularly from her mother, who snatched away her drawings, destroyed her materials and beat her when she discovered her painting.

Undeterred, Kusama enrolled at the Kyoto Municipal School of Arts and Crafts, where she was trained in Japanese nihonga. With its strict technical constraints and hierarchical conventions, the traditional painting style held little appeal. A 1949 painting on paper, Onions, heralded her more radical personal expression. With its careful, accurate depiction of the form, colour, and papery skin of three onions, the work nods to nihonga’s realist conventions. But it is the repetitive black and beige grid undulating across the canvas that dominates the work; a prototype of the continuous “Infinity Net” patterns that would become Kusama’s hallmark.

Solo exhibitions in Tokyo soon followed, but Kusama had set her sights further afield. Japan was, in her words, “too small, too servile, too feudalistic, and too scornful of women.” With support from Georgia O’Keefe, an artist she admired from afar, she moved to the United States in winter 1957 ­– settling first in Seattle, before moving to New York.

Months of hardship ensued. “Living the life of a student I gradually ran out of money,” recalls Kusama. “I entered a period of extreme poverty and struggle creating art. There were passport issues with the immigration bureau, and problems securing food. I became ill. The windows of my studio were full of cracks and my bed was a broken door board I picked up in the street. I could not sleep, so I painted.”

Her break came in October 1959, when five Infinity Net paintings were presented at a solo exhibition at the Brata Gallery in New York. Frank Stella and Donald Judd purchased paintings, and an exclusive agreement with the Stephen Radich Gallery followed the next year.

By the 1960s, Kusama had secured her place as an original artist with a distinctive mode of expression. She befriended Donald Judd, Eva Hesse, and, in particular, “the purest of all persons”, Joseph Cornell. Her sculptural work began evolving into spatial and performance art, with avant-garde “happenings” in prominent public settings, typically featuring polka dot painting, nudity, and messages of peace and love.

After her groundbreaking Narcissus Garden installation at the 1966 Venice Biennale, Kusama herself became an ever more integral element of her oeuvre. As well as appearing as part of her artworks, she carefully honed her public image – routinely photographed with new work, and regularly appearing in vibrant block colours, as well as her soon-to-be-signature bobbed wigs.

For all her reputation as a High Priestess of the hippie love scene, Kusama was reticent about her romantic attachments and spoke openly about her fear of male genitalia and her displeasure in heterosexual sex. She described her long and intense relationship with Cornell as passionate yet platonic.

In 1962, the artist’s phallic-shaped “soft sculptures” made their debut appearance in a group show at the Green Gallery, New York. Over the next few years, her protrusions adorned chairs, ladders, shoes – and even a boat. For critics, her overtly sexualized objects were a provocation. For Kusama, they were another staging of fear and self-erasure. “I make them and make them and then keep on making them, until I bury myself in the process. I call this obliteration.”

Kusama’s anxieties about effacement were only compounded as successive male peers gained fame with her ideas. Andy Warhol took up her repetitive images for his Cow Wallpaper. Claes Oldenburg was “inspired” by her fabric phallic couch to create his own soft sculpture, with which he became world famous. In 1965, Kusama created the world’s first mirrored-room environment at Castellane Gallery. Months later, in a total swerve from his established practice, Lucas Samaras exhibited his own mirrored installation at the much more prestigious Pace Gallery.

Intense periods of depression followed. “I can’t even count the number of times I contemplated suicide,” the artist recalls. After Cornell’s death in 1972, her mental health deteriorated further. Returning to Japan in 1977, she checked herself into a psychiatric hospital, where she would later take up voluntary permanent residence, with a studio within walking distance.

Through the 1980s, Kusama’s interest in repetition transposed to printmaking, including silkscreen, etching, and lithography. In the mid 1990s, outdoor sculpture started to appear, with works such as Pumpkin at the Benesse Art Site on Naoshima, Japan; Tulipes de Shangri-La in Lille, France; and The Hymn of Life: Tulips in Beverly Hills, Los Angeles all transporting her repertoire of forms, patterns, and motifs to public space.

Since 2009, Kusama has been immersed in an ongoing, large-scale series, My Eternal Soul, now numbering over 550 works. Reviving many motifs from her earlier years, the series represents Kusama’s continued search to understand and reconcile essential dichotomies: life / death, love / hate, past / present. In the same period, major Kusama retrospectives have shown across Europe and the United States, securing record visitor numbers, not to mention Instagram hashtags. In 2017, the Yayoi Kusama Museum opened in Tokyo.

As she approaches her 92nd birthday, Kusama experiences ageing with a sense of urgency, and an eye on infinity. “My desire to create is stronger now than it’s ever been in my life,” she says. “I paint fervently day in and day out. I want to pass down some fantastic work to posterity when I die. I think about that so much that I can’t get to sleep at night.” 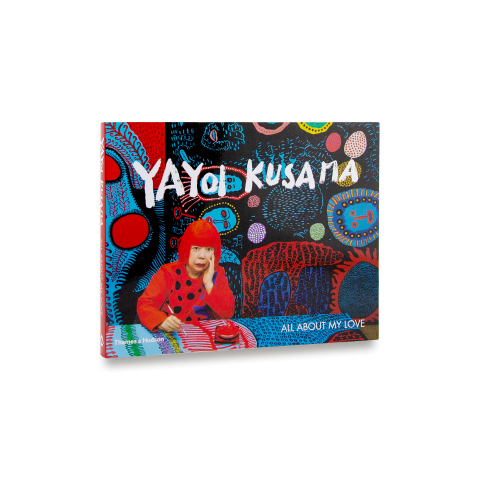