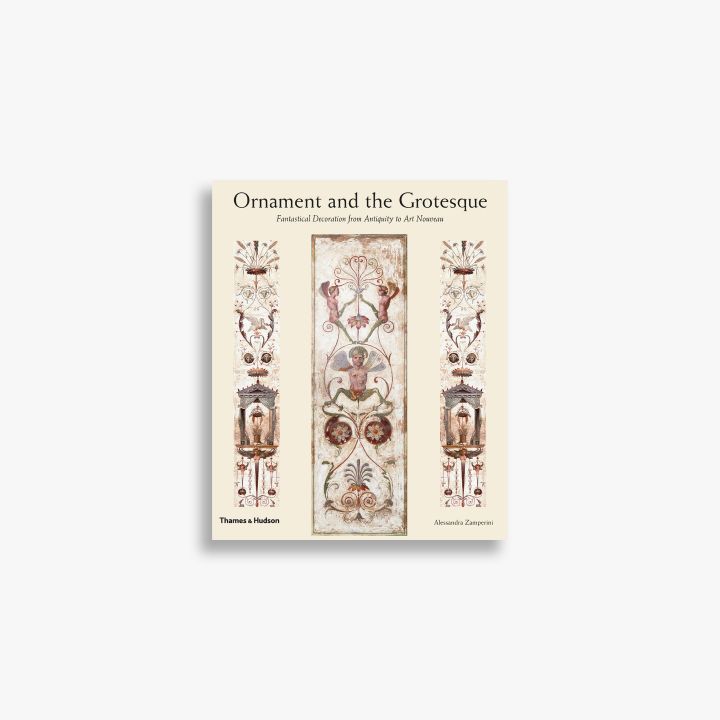 Ornament and the Grotesque

Reveals the key periods and influences that shaped grotesque ornament, from its origins in Roman art to Art Nouveau in the late 19th century

Previous English Style and Decoration
Next The Arts & Crafts Companion

When Nero's Domus Aurea was inadvertently rediscovered in Rome at the end of the 15th century, its sumptuous interiors not only sparked renewed interest in ancient culture but revealed an unfamiliar, playful style of classical ornament that captured the imagination of Renaissance artists. By that time this fabulous palace had long been covered with earth, and for the first explorers it was like entering a series of caves or 'grottoes', which is why they called the style of the painting on the walls and ceilings 'grotesque'. Far removed from the formal language of traditional classical ornament, what they saw was something essentially decorative and only semi-serious: parodies of classical mythology, fantastic hybrid monsters, men hatching out of eggs, images of perverse eroticism, impossible architectural visions, giant butterflies, mischievous putti, monkeys, sphinxes and nightmare insects - a whole repertoire of uninhibited imagination where nothing was taboo.

Inspired by this discovery and following the medieval predilection for the fanciful and the monstrous Italian artists, including Perugino, Signorelli and Mantegna, immediately started to copy the style. On the ancient Roman precedent, mythological or allegorical scenes and motifs were arranged symmetrically without any apparent structure in terms of subject matter or scale; the Renaissance artists preferred to impose a vertical format on the loosely connected elements in order to bring a sense of order to the overall compositions.

It was Raphael's decoration of the Vatican Loggie in the early 16th century made the grotesque into a Europe-wide fashion, and it soon became an integral decorative feature of the most lavish residences, incorporating ceramics, textiles and tapestries.

As the grotesque was disseminated throughout Europe, important new stylistic forms emerged and evolved. The first book to reveal this vast treasury, this brings the story up to the late 19th century and shows how it led eventually to Art Nouveau.

'A lucid, eloquent and interesting survey … a book that both teaches and delights, inviting us to consider seriously imagery that has conventionally been overlooked as ‘mere’ decoration'
The Art Book

'Quite beautiful … a valuable contribution to the subject'
The Art Newspaper

Preface • Origins: The Roman Period • The Classical Conception of Art • Precursors to the Grotesque • The Domus Aurea • Spread of the Grotesque: Evolution and Variation • The ‘Fantastic’ in the Middle Ages • Medieval Grotesques: Monsters in Art • Classicizing Features • Miniatures: Themes and Decorations • The Discovery of the Domus Aurea • The Fascination of ‘Grottoes’ • Between Rome and Florence: The Spread of Grotesques Iconography and Iconology of Grotesques • Contaminations: Hieroglyphs and Heraldic Emblems • Spread of Grotesques in Italy • Raphael and his School: Rise and Spread of Grotesques in the Early 16th Century • Raphael’s Promotion of the Genre: The Renaissance of Grotesques • Propagation and Interpretation of a Model: Raphael’s Pupils and Grotesques • Legacies and Developments in Italy • The New Canons. Styles, Themes and Iconographies • Critical Reflection • Decorative Programmes • Specialization of Artists Applications in the Minor Arts • Prints and Engravings • Reception in Europe • The 17th Century: Dialectic Between Efflorescence and Classicism • Tradition, Innovation, Variation on the Theme • The Inventions and Innovations of Jan Bérain • The 18th century and the Rococo: Singeries, Arabesques and Chinoiseries • The Naturalist Dimension: Arabesques TheLudicDimension:Singeries• TheExoticDimension:Chinoiseries•TheMagical Dimension: Porcelain • The Mirror of a World • Neoclassicism: The Ancients and Raphael Ancient Forms and New Thoughts • Diversification and Dilution of Grotesques • The Revival in the 19th Century

Alessandra Zamperini completed her doctorate at the University of Verona. She has written widely on Italian art history from the fifteenth, sixteenth, and seventeenth centuries. Zamperini is the author of Ornament and the Grotesque: Fantastical Decoration from Antiquity to Art Nouveau, also published by Thames & Hudson.