Eliasson's elliptical mirrors reflect the sky in its infinite incarnations, as well as the surrounding flora and grasses. [Credit: Your Glacial Expectations (2012). Study of an elliptical mirror, part of a site-specific installation. Kvadrat headquarters, Ebeltoft, Denmark Photo: Casper Sejersen]

The work, commissioned by the Danish textile company Kvadrat for its headquarters in Mols, Denmark, continued Eliasson’s fascination with mirrors, nature, meditation and reflection. In the intervening years Eliasson had completed a number of spectacular projects for public spaces, including The New York City Waterfalls, 2008, and Harpa Reykjavik’s new Concert Hall and Conference Centre, 2011, with its crystalline mirror surfaces.

Your Glacial Expectations occupies the rolling hills around Ebeltoft and the Kvadrat building. Although the company originally envisaged Eliasson’s involvement in terms of a building project, Eliasson proposed that the work should spring from the surrounding landscape and a collaboration with the landscape architect Günther Vogt, whose own work is marked by a deep passion for plants and the workings of the natural world. The project demonstrates both Vogt and Eliasson’s complementary approaches, while also stimulating a personal literary response from Josefine Klougart, a celebrated young Danish writer who grew up in the Mols mountains (and was recipient of the Danish Royal Prize for Culture in 2011).

Eliasson has long been fascinated by the undulating landscape – unusual for Denmark – that his five mirrored artworks now inhabit. ‘It reflects’, he says, ‘as my friend the geologist Minik Rosing says, the underside of a glacier, in that it bears the traces of ice sheets that retreated long ago, during a period of radical climate change.’ Set into the sculpted landscape and grasses, his elliptical mirrors evoke glacial pools, morphing in shape from a perfect circle to ever more elongated ovals as the viewer moves around them. As Kloughart describes in a book documenting the creation of Your Glacial Expectations ‘the surface of the mirrors … offers the viewer the opportunity to almost vanish into nature: the viewer is un-reflected and sees only the seemingly infinite reflection or the sky. What we actually see when we stand there is the world speaking to itself without in any way addressing us.’ Eliasson has placed the sky beneath our feet, and at the same time captured the immensely fragile environment in which we live and breathe. He hopes that by documenting the way the work responds to its natural surroundings, he will help readers get a real sense of ‘the space that we occupy within this narrow, life-giving, atmosphere that encircles us’.

Eliasson pushes ‘the sensory qualities’ of the project, as he calls them – ‘tangibility, fragility, and the sense of the process, the growth, and the seasons’. His mirrors glint in a landscape that at first sight seems rather unprepossessing, spanning a peninsula on the east coast of Jutland and featuring the stolid warehouse/administrative building of the adjacent Kvadrat textile company. Yet close up, elegant swaying grasses are juxtaposed with oval groves of trees, and then there are the pallid ‘pools’ themselves, their mirrored surfaces reflecting tree-tops, surrounding flora, mist and sky. Eliasson’s vision embraces the universal and the ephemeral; the reflected sky shifts from an impossibly pure blue with puffs of white cloud, to one laden with rain, or drained of colour by winter snow. The surface is occasionally scattered with wind-swept flower heads – looking impossibly lovely.

The landscape-architect’s interventions are inspired by the glacial processes and the flora that have moulded the peninsula over time. Each grove of trees represents a single species of different ages and heights, while beautiful woodland and grassland species fringe the edges of the mirrored ‘pools’ (from viper’s bugloss to oxeye daisies). Encouraging us to wander between the glacier lakes of the Ice Age, our own inner landscapes, and the modern landscape ‘altered by the human hand’, Eliasson’s creation invites us to participate in a genuinely immersive and meditative experience. 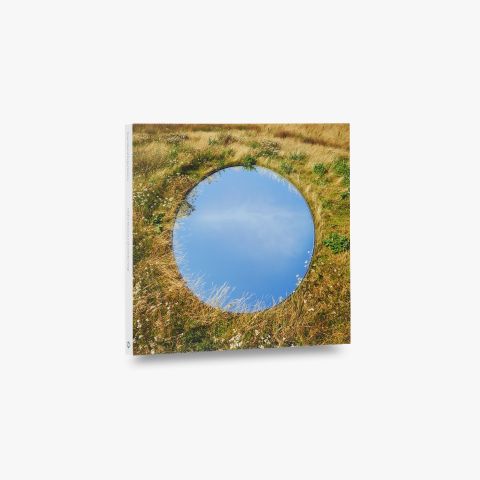