The ancient origins of contemporary creativity: ‘The Story of Scottish Art’

From the Neolithic age to contemporary Glasgow, ‘The Story of Scottish Art’ charts an epic 5,000 years of bold creative tradition. In this evocative extract, author Lachlan Goudie visits the tidal island of Oronsay, exploring a powerful and surprising link to his artistic heritage.

There are few places in Scotland more isolated than the tiny Hebridean island of Oronsay. This wild outcrop, tethered to its neighbour Colonsay by a slip of shifting mudflats, has been taking its chances against the North Atlantic for thousands of years. It’s the last place you would expect to discover a treasury of Scottish art. But there are wonders here, and they’ve been awaiting you for centuries.

The name Oronsay may be derived from the Old Norse for ‘island of the ebb tide’. Only at slack water can you cross from Colonsay; for an hour or two a path can be discerned in the sand, an ancient track that is marked by a few subtly placed boulders. In some spots you have to wade through shallow pools of seawater. People have been making this crossing for thousands of years, but on any given day there are few visitors to the island, and it has more seals than inhabitants.

Oronsay is not so much a geographical location as an island in time. The walk across may be brief, but with every step you overtake the centuries, traversing a landscape that would have looked no different to the pilgrims, monks and masons who have come this way before you. In their day, the path would have been interrupted by a stone cross: a marker of hope, submerged twice daily beneath the tidal streams.

In Hebridean folklore it’s recounted that in the 6th century the Christian missionary St Columba sailed across from Ireland, accompanied by a follower named Oran. After realizing that on a clear day he could still discern the contours of his Irish homeland, Columba climbed back into his coracle and sailed on towards the isle of Iona, hoping that Ireland would disappear below the horizon. Oran stayed and established a monastery. And while the surviving stones proffer no evidence for such an ancient foundation, the remains of a priory dating from the 14th century exist on Oronsay to this day.

It is a tranquil spot with a view that embraces the mountains of Jura, the coastline of Islay and the open Atlantic. Over the years the buildings of the monastery have settled themselves into the earth, and lichens and mosses have softened the contours of the architecture. From the church door you can hear waves breaking upon the nearby sands and the call of curlews. However, it’s not the setting that makes this place remarkable. It’s the art.

Outside the church buildings stand two stone crosses. The larger of the two is 3.7 metres (more than 12 ft) tall and upon one face, a carved interlace pattern threads its way towards the top of the column. There, suspended upon a stone disc at the intersection of the cross’s arms, hangs the body of Christ, sculpted with great tenderness. He looks wearily towards the west, the waves and the salt-lashed wind. This is a powerful religious icon, but it’s also an individual artistic statement. Etched into the stone at the base of the cross is a Latin inscription that identifies its maker: ‘Mael-Sechlainn Ó Cuinn, mason, made this cross’.

We know little about the nomadic sculptors of western Scotland in the late 15th century, when this was carved. But we do know that Mael-Sechlainn Ó Cuinn was Irish, one of a family of craftsmen who originally settled on Iona. For generations they plied their trade, sculpting effigies and stone crosses. Gaelic aristocrats employed them to commemorate their lives, and the reputation of the Ó Cuinn spread across the Western Isles.

I was born in Scotland, and I have painted since I was four years old. Most of my lessons were learned from my father, a painter before me. If Mael-Sechlainn was anything like me, he would certainly have watched his dad at work and been delighted by the faces and patterns, beasts and birds that emerged each day from the hewn stone. In a corner of the workshop, out from under his father’s feet, he probably chiselled his own efforts upon cast-off fragments, badgering him for stubs of charcoal to draw with. It’s how I learned, as a boy. Eventually Mael-Sechlainn grew up to become a master craftsman, presiding over a workshop on Iona. He used his hands every day, practised his skills, was fulfilled and frustrated by his craft. He was an artist.

One of the grave-slabs carved by Ó Cuinn – or possibly an ancestor of the same name – still lies in the grounds of Iona Abbey. It depicts a warrior, portrayed life-size and lying in armour. A loyal hound supports his feet; there are angels upon his shoulders, interlace patterns and a griffin. The craftsmanship is so fine that you can imagine the pleats of his stone tunic ruffling in a breeze. Once again, chiselled into the stone is an inscription that records the craftsman’s identity: ‘Mael-Sechlainn Ó Cuinn, mason, fashioned it’. But what intrigues me about this monument is the name of the deceased: Lachlan. To read my name carved by Ó Cuinn’s own hand makes me feel a particular kinship with this creative ancestor. Around the year 1500 business began to dry up on Iona, so Mael-Sechlainn uprooted his workshop and moved. After perhaps convincing a handful of apprentices to accompany him, he retraced Columba’s journey and sailed for Oronsay. There he resumed his work, overseeing the restoration of the priory and carving yet more grave-slabs.

Ó Cuinn founded a school of monument carving that thrived on the island for sixty years. Students, learning from their mentors, unlocked images from blocks of stone: ships, plant scrolls, angels and warriors. As they worked, their chinking hammers accompanied the voices of the church choir, echoing across the cloisters.

By 1500, the art of Scotland had been evolving for centuries. But for every Mael-Sechlainn Ó Cuinn there were hundreds of other artisans and artists whose works were unsigned, known to us only by the beauty of the objects they crafted. The foundations of an indigenous creative spirit were laid by these anonymous artisans, carved in stone, sculpted from ivory, painted on vellum. The history of Scottish art is their legacy, and I would like to meet them. This book is my pilgrimage, my attempt to trace the elusive sources of Scottish creativity, and perhaps to gain a clearer understanding of the forces that have shaped my own identity as a Scottish artist. 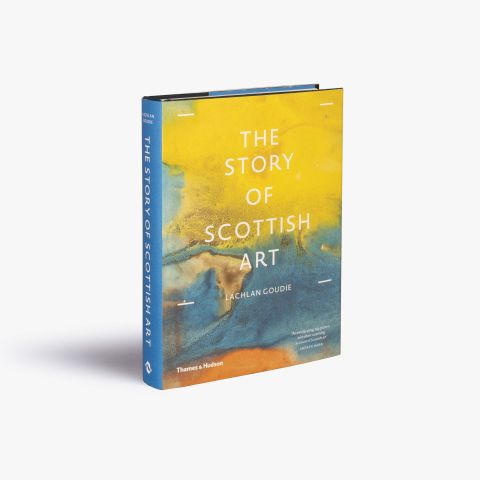 The Story of Scottish Art

Lachlan Goudie Out of stock
+