The history of 'Joseph Banks’ Florilegium' encompasses Captain Cook’s 'first voyage', and the revelatory scientific discoveries that came out of it.

The history of Joseph Banks’ Florilegium encompasses Captain Cook’s “first voyage”, and the revelatory scientific discoveries that came out of it. They were recorded in a remarkable series of botanical illustrations that, for more than two centuries, remained little known outside specialist circles. A new edition sees a selection published in book form for the first time.

2018 marked the 250th anniversary of the start of the first of James Cook’s great voyages: it was on 26 August 1768 that his ship, HMS Endeavour, set out from Devonport on the first of the three journeys of exploration that would make the mariner famous. But the figure that the public of the day would have associated with this ambitious undertaking was not Cook, then only recently promoted to Lieutenant, but rather Joseph Banks, the naturalist whose research on the journey would open up new scientific horizons for his generation.

The Endeavour was undertaking a scientific voyage supported by the Royal Society, its immediate purpose being to observe the transit of Venus across the Sun from Tahiti. But for Banks, intent on pursuing the botanical interests that had engaged him since his youth, the journey’s goals were wider, and the wealthy young landowner had been involved in its preparation from the beginning. The 25-year-old was a part-financier of the voyage, which allowed him to bring seven others, including the eminent Swedish naturalist Daniel Solander, two artists – the one remembered by history is Sydney Parkinson – and a scientific secretary.

The Endeavour sailed westwards, via Madeira, Brazil and Tierra del Fuego, before rounding Cape Horn. The astronomical observations on Tahiti concluded, Cook’s orders directed him to further explore the South Pacific, including New Zealand and South Eastern Australia (where the vessel narrowly escaped being wrecked), before returning home; the crew sighted Britain on 10 July 1771.

At every place of landing – and during the journey itself, from the deck of the ship – Banks and Solander gathered specimens, their discoveries recorded on paper by Parkinson. It was a frenetic process, the naturalists’ ambitions exceeding the space of the quarters in which they were travelling. Parkinson, a Scottish Quaker who was two years Banks’ junior, died from dysentery at sea six months before the end of the voyage, leaving behind nearly 1,000 drawings of plants and animals that are remarkable both for their accuracy and their artistic accomplishment.

They form the core of the Florilegium. Banks was determined to publish them as part of his ongoing scientific research, but although he engaged as many as 18 engravers over the years to work the drawings into copper plates, his plans to print from them remained unrealised at the time of his death in 1820.

The plates, effectively all ready for printing, eventually found their way from the herbarium in Banks’ London home at 32 Soho Square to the National History Museum: some were eventually printed, but only as black plates, intended for the scientific community, and not on the scale that Banks had considered. That situation lasted until the late 1960s, and an encounter between Chris Humphreys, for many years the Museum’s lead botanist, and Joe Studholme, a young printer from Editions Alecto. The eventual result of that meeting was that the company’s associated imprint, Alecto Historical Editions, would embark on publishing the Florilegium for the first time in colour. Printed using the labour-intensive à la poupée process, its limited boxed edition of 35 volumes was more than a decade in the making, its final instalment released in 1990.

That remarkable project serves as the basis for the Thames & Hudson edition. Philip Watson, Commissioning Editor, Museum Division, remembers how he learnt of its existence only some two decades later: “I knew straightaway there was something exceptional about the prints – it seemed peculiar that in 200 years it hadn’t come into book form.”

He set about making that idea a reality, locating Studholme, by then retired, who welcomed the idea, as did the Natural History Museum. “Selecting 150 plates from Alecto’s 743 was fascinating. Some of us were interested in the brighter, more unusual-looking plants, we were led by eye and curiosity, while guided in the botanical sense by David Mabberley, the eminent Banks specialist. There were limits set by pragmatism and publishing interest, but the 150 chosen represent every landfall, and in the order of the voyage itself,” Watson recalls. Mabberley has contributed new botanical commentaries to each image, with the edition completed by two essays by art historian Mel Gooding, and an afterword by Studholme that recalls the process of creating the Alecto edition.

“It started in a smaller way, persuading colleagues, and gradually gathered steam as others became involved,” Watson remembers. “For example, Thames & Hudson in Melbourne were tremendously enthusiastic, given Banks’ journey and his links with Australia; so was the Folio Society. There will be an Italian edition, too. It’s always gratifying when others become interested in an idea that you start off with – in such a way, it becomes much more than a passion project.”

Whether you treat the Florilegium as a record of science, as the fact-oriented naturalist himself would surely have chosen to, or as an artistic document, as seems so tempting today, the importance of Banks’ voyage and discoveries is undeniable. “As for their impact in scientific terms,” Watson concludes, “it was David Attenborough who said that the specimens that Banks brought back were to that generation like the moon rocks were to ours. As exotic and outlandish, but infinitely more beautiful.” 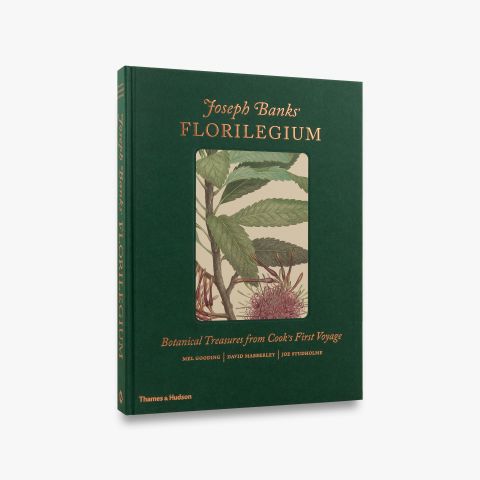