Rock Graphic Originals: Revolutions in Sonic Art From Plate To Print is a unique insight into, and record of, the 20th century’s most exciting and productive period of rock poster art and graphic design. Below you’ll find an extract of the introduction from author, musician and creator of the world’s first ‘designer jean,’ Peter Golding and bestselling author Barry Miles.

It is generally agreed that the San Francisco psychedelic scene began at the Red Dog Saloon in the old silver-mining town of Virginia City, Nevada, 40 miles (64 km) south of Reno. The building—a three-story hotel, The Comstock House, at 76 North C Street—was bought by Mark Unobski’s father, who was delighted that his son had finally found himself a project. Mark wanted to restore the building to its 1860s Victorian heyday and provide food and live music in a relaxed, laid-back setting. He gathered together like-minded staff, including: Chandler Loughlin (who had experience of running folk-music coffee houses); Don and Roz Works, former house painters already living in Nevada; chef Jenna Worden; Seattle folk singer Lynne Hughes, who served as the mistress of ceremonies; a giant Washoe Indian bouncer, Mike Jones; and political activist Luria Castell’s Family Dog Collective—consisting of her friends Ellen Harmon, Jack Towle, and Alton Kelley—who worked on restoring the building. Pretty soon, they had all taken to wearing old-fashioned Edwardian outfits, with the women in long gowns. The music was provided by The Charlatans, a folk-rock band who had been rehearsing in San Francisco but had never performed live before.

It is the poster from their residency that concerns us here: known as The Seed, it is regarded as the first psychedelic poster. Charlatans keyboard player Mike Ferguson designed everything except the distinctive lettering of the band’s name, which was created by the group’s leader, George Hunter. It was small—just 10 × 14 inches (25 × 36 cm)—but collectors still regard it as a poster rather than a handbill. It contains virtually all the elements that characterize San Franciscan psychedelic art: cartoony drawings, blobby lettering, decorative borders, dingbats, and other references to old-time Western advertising. The ultra-rare first printing was made in blue ink and gave the dates of the band’s residency as June 1–15, 1965. But the venue was not yet ready, and a second printing, in black ink, revised this to ‘Opening June 21.’ In fact, The Charlatans ended up playing a six-week run. Although the Red Dog was a bar, the customers were mostly friends and their drugs of choice were pot and acid. This, combined with The Charlatans’ extended, improvisational sets, and a rudimentary light show provided by Bill Ham and Bob Cohen that threw blobs of color across the walls and tripped-out customers, inspired a new, loose style of communal dancing. It was a world removed from jerky dances for three-minute pop songs. By the end of the summer, the Red Dog Saloon had created free-form acid music, the psychedelic light show, and the psychedelic poster.

The Family Dog Collective returned to San Francisco, settling at the Dog House, 1836 Pine Street, across town from the Haight. A rooming house managed by Bill Ham, the building owed its name to the fact that the dozen or so residents all owned dogs. Energized by their experience that summer, Luria, Ellen, Jack, and Alton started a company, The Family Dog, with the slogan ‘May The Baby Jesus Shut Your Mouth And Open Your Mind.’ Intent on recreating the Virginia City scene in San Francisco, they soon found that while they had been away, things had already begun to happen. Chet Helms, who began staging civil-rights benefits in Texas before he even went to college, had been organizing dance concerts at fifty cents a head with local musicians in the large basement of a boarding-house at 1090 Page Street. Deciding to combine forces and put on a large event together, Helms and The Family Dog rented Longshoremen’s Hall on Fisherman’s Wharf for a Saturday night ‘Rock ’n’ Roll Dance And Concert’ on October 16, 1965. Called ‘The Family Dog Presents A Tribute To Dr Strange,’ the evening, which ran from 9:00 p.m. until 2:00 a.m., featured The Charlatans, Jefferson Airplane, The Marbles, The Great Society, and another new band—the Grateful Dead—who lived communally a few doors down from The Charlatans at 710 Ashbury. The poster was designed by Family Dog member Alton Kelley, a motorcycle mechanic who had been doing a lot of collages, with some help from Amy Magill. The ‘Dr Strange’ reference came from Family Dog member Ellen Harmon, who had a huge collection of Marvel Comics.

The acid that people had been taking came mostly from the Grateful Dead’s soundman and chemist, Owsley Stanley, who apparently produced around ten million doses between 1965 and 1967. (The drug was only made illegal in California on October 6, 1966.) The use of acid on the West Coast was popularized by Ken Kesey with his Acid Test parties, a series of weekly events at which LSD was available, alongside live music, improvisational theater, and movies. The first Test in San Francisco occurred on January 8, 1966, at the Fillmore Auditorium but the biggest, most memorable such gathering was the Trips Festival, held over a three-day period at the Longshoremen’s Hall on January 21–23. It was staged by Kesey, Ramon Sender—who provided synthesizer music—and Whole Earth Catalog publisher Stewart Brand, who set up a tepee. This was the first time any of the three had met Bill Graham. Owsley Stanley provided the LSD, which was in the ice cream.

On Saturday, January 22, a crowd of 6,000 people arrived to dance to the Grateful Dead and Big Brother and the Holding Company, witness the first fully developed light show of the period, and drink the magic punch (also spiked with LSD). A thousand more people were turned away. A standard ‘Can You Pass The Acid Test?’ handbill advertised the events from the Palo Alto Test onwards, designed by Paul Foster (although it has been falsely attributed to Norman Hartweg) and with a space in the bottom right-hand corner for the name of the venue to be added in by hand. The handbills were printed in black on white, blue, or orange (‘goldenrod’) paper, but some were hand-colored with magic marker pens in fantastic psychedelic rainbow hues. The Trips Festival also used a black-and-white handbill designed by Wes Wilson, a Bridget Riley-style optical device in the center. This marked the start of a convention of making the handbills approximate the visual equivalent of an acid trip. From now on there would be a constant battle between the promoters—who wanted legibility—and the artists—who wanted people to have to study the artwork carefully in order to decipher the meaning.

With so many concerts, the need for poster designers increased and soon there was a group of artists who devoted their entire time to this task. They became known as the San Francisco Five: Stanley Mouse and Alton Kelley, Rick Griffin, Victor Moscoso, and Wes Wilson.
Wilson filled every inch of his posters with the boxy typeface and sensuous illustrations. ‘Wes freed us!’ Moscoso enthuses. ‘It clicked: Reverse everything I have ever learned! A poster should transmit its message quickly and simply? No! Our posters were taking as long as they could to be read, and were hanging up the viewer!’ Rick Griffin’s poster for four gigs featuring Jimi Hendrix, John Mayall, and Albert King on February 1–4, 1968 (issued as BG 105) has frequently been cited as the most perfect example of San Francisco psychedelic poster art, for its colors, imagery—Griffin’s trademark flying eyeball—and characteristic blobby lettering.

The counter-culture movement—whose followers were known as hippies in San Francisco, freaks in Los Angeles, and the underground in New York and London—can be said to have ended on October 6, 1967, when those original hippies who had not already fled Haight-Ashbury held a ‘Death of Hippie’ mock funeral procession to signal the end of the Summer of Love. It was organized by radical collective the Diggers to request the media to stop covering the Haight and to end the rabid commercialization of the hippie lifestyle and appropriation of their experiment in social and alternative living. The ‘mourners’ burned counter-culture newspapers, posters, and hippie apparel, then carried a coffin down Haight Street and conducted a ‘kneel-in’ at the corner of Haight and Ashbury.

Extract taken from Rock Graphic Originals: Revolution in Sonic Art From Plate to Print ’55-’88 by Peter Golding with Barry Miles. 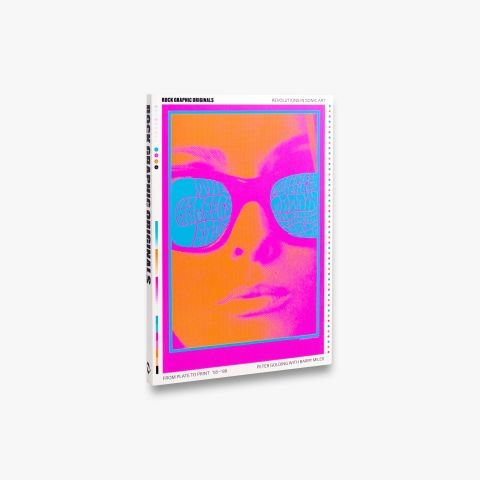