Mapped: Our Global Guide to Food on the Hoof

Stalls and carts - whether the vendors lining the ancient Silk Road trading route, the oyster stalls of Roman London, or the Aztec food markets encountered by the Spanish conquistadores - selling indigenous, ready-to-eat snacks have been a feature of city life for millennia. What’s changed is the seriousness with which street cuisine is made, and served.

No longer an edible lowest common denominator, street food has become an important feature of a city’s gastronomic scene. There are tours focusing on street food of a particular culture or origin. The Michelin guide now covers it. Some high-end chefs have introduced pavement versions of their signature dishes. Battalions of gourmet food trucks tour some cities, their fans picking up each new location on social media. Street food is now only ‘street’ in the sense of cool. It’s where it always was, but it’s arrived.

Thanks both to its thousand-year history of Aztec food markets and its 21 million current inhabitants, Mexico City is a street food phenomenon. Vendors will take advantage of all possible means and formats, selling from bicycles and stands as well as fixed markets, and trucks. The cuisine is mostly Mexican, but not as most Europeans would recognise, with specialities including chapulines (fried grasshoppers), charcoal-baked plantains with jam and condensed milk, and tamales, a steamed corn dough containing chicken, pork, chocolate or cheese. At the Mercado de Dulces Ampudia, sweet food is also widely available, including café de olla (cinnamon coffee) and ollitas de barro, tamarind paste flavoured with sugar and chilli.

London’s street food scene exemplifies the best of old and new trading. At the city’s culinary heart is Borough Market, first established more than a thousand years ago, and now a beacon of British and global artisanal excellence. Brixton Village and Market Row – with food from Pakistan to Mexico, via China and Jamaica – is nearly as venerable, while there are diverse and excellent offerings throughout north and east London. The fast pace of recent development has created opportunities for start-up markets like KERB, behind King’s Cross Station. London also has a dynamic and highly diverse food truck scene, from Bengali via Mexican, to New Orleans.

Los Angeles's Grand Central Market offers a diverse mix of flavours and cuisines and has been the city's foodie hub for over a century [Credit: © Robert Landau/ Alamy Stock Photo]

Street food in Los Angeles originally catered for hungry nineteenth-century gold prospectors. With numerous workers from both Mexico and China, these have been the most popular cuisines. The city’s rapid expansion made it perfect for food carts and mobile vendors – today trucks more than carts – have always been popular. Grand Central Market (opened 1917) hosts a hugely diverse selection of central American, Asian (including supposedly the best Thai in the US) and European cuisines, and is the city’s most popular lunch spot. The modern food truck movement began just over a decade ago when trucks from Hollywood film sets were taken onto the street, and now there are over 5000 in the city. The newest development on the LA food scene is 626 Night Market, a culinary extravaganza modelled on the night markets popular across Asia.

Stinky tofu, a form of fermented tofu so named for its strong odour. It is said the stronger the smell, the greater the flavour. [Credit: © Zoonar GmbH/ Alamy Stock Photo]

Like Mexico City, street food in Shanghai has an ancient history, as far back as the Zhou dynasty (100-256 BCE); also like Mexico, most of the food on offer is local. The scene is more static than in many cities, taking place in numerous fixed markets, such as the Chang Li Lu food market, and the Zhangjiang Hi-Tech Park Night Market, where young tech employees from the nearby biotech hub throng to dine after work. Shanghai’s sweet, oily cuisine makes use of freshwater fish, crabs, eels and lotus root. Delicacies include shansi leng mian (cold noodles served with hot eels in a soy and ginger sauce), stinky (fermented) tofu, pork and spring onion pancakes, and a wide range of traditional sweets, including green bean and moon cakes.

By some measures, Bangkok should be the street food capital of South-East Asia. Yet Singapore has the first street vendors in the region to be recognised by the Michelin Guide. It also has one of the most tightly regulated (and safest) food markets in the world. The best food is to be found in two areas, firstly the Maxwell Road Hawker Food Centre, part of the city’s Chinatown and the best place to find celebrated Chinese dishes, including Tian Tian Hainan Chicken Rice. Fish-head curry and many varieties of roti, often eaten for breakfast, are also favourites here. The other must-visit food destination is the market at the East Coast Lagoon, situated atmospherically right on the beach. The food here is seafood-based and international: try oyster omelette at the Song Kee Fried Oyster Bar, or barbecued stingray at the East Coast BBQ Booth. 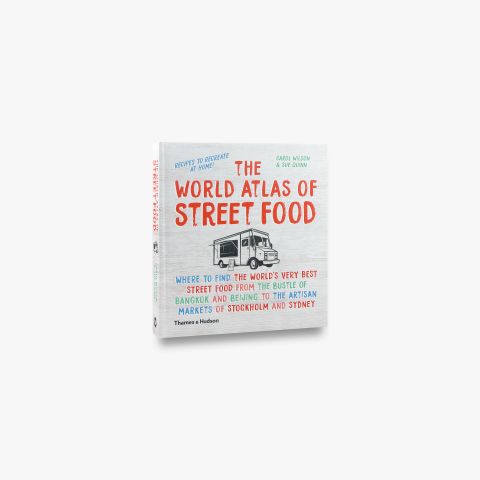 The World Atlas of Street Food