As at ease in the lecture theatre as he is at the potter’s wheel, Dr Aaron Rosen’s mission is to make the history of art accessible to anyone with a questing mind - whether university student, young child or curious adult.

Aaron Rosen’s fascination for how art and religion inform our everyday lives is infectious, and you can often catch him on the radio or read his articles in magazines and newspapers on both sides of the Atlantic. About to become a father himself, we tracked him down to ask about his new book for children, A Journey Through Art, which looks at the history of art across the world and is lushly illustrated by Lucy Dalzell.

How and why is art important?

Good artists, in every period and every culture, ask questions – about themselves, their surroundings, their culture, and art itself. Educating ourselves about the history of art, especially in a global context, allows us to understand those questions. And in a time when we are more obsessed than ever with quick answers, it’s really important to ask really good questions.

What effect do you hope this book has on the children who read it?

I hope this book will make curious kids even more curious! It was impossible to tell all the stories I wanted in this book, which covers so many different periods and cultures. But I hope that it leaves a trail of breadcrumbs for kids to follow and inspires them to learn more about some of the artists, objects and places mentioned.

What compelled you to write this book now?

Both of my countries (the UK and the USA) have developed an increasingly xenophobic streak. It’s important that we fight narrow-mindedness and a lack of concern for other cultures with more education – especially for children. I wanted to write a book that encouraged students to move away from an exclusively Eurocentric focus, and set places such as Timbuktu, Tokyo and Rio de Janeiro alongside Athens, Rome and London. I also wanted to emphasise how cultural exchange and immigration have driven some of our greatest achievements. We need more art, not walls!

Which period you researched surprised or pleased you most?

Researching the culture of First Nations people around the world – such as Nawarla Gabarnmung in 35,000 BCE, Cahokia in 1100, and Haida Gwaii in 1825 – was inspiring, especially since I live in Montana near the home of the Crow Nation. It’s imperative that countries like the United States do more to support Native Peoples and help them to preserve their heritage.

My scholarly work sits at the intersection between religion and visual art, so I loved the opportunity to delve more into the history of religion in places I have not studied much before in depth. I particularly enjoyed deepening my knowledge of Islamic art around the world, from Jerusalem in 700 to Granada in 1400 to Isfahan in 1700. I hope that I help readers see the true variety present in Islamic art and the diverse ways Muslim artists and architects have approached similar religious requirements.

You are about to become a father. What do you hope for your own child?

Some day I hope my son sees this book on our bookshelves and picks it up and I see him snuggled up in a comfy chair reading it intently. He can do whatever makes him happy in life, but I hope he finds some place for art. 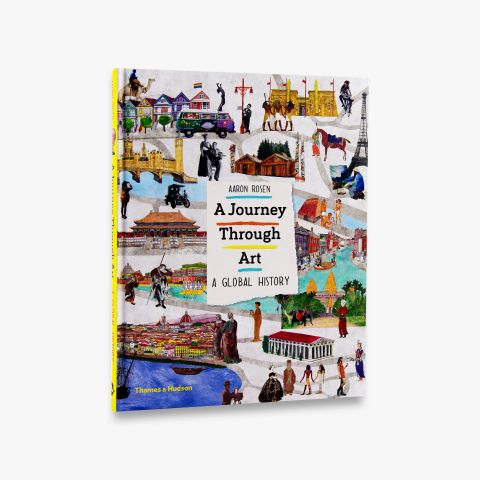 A Journey Through Art