The surreal, the comic and downright horrifying collide in the extraordinary paintings of Jheronimus Bosch. Following a year of celebrations, this book marked the Prado’s historic exhibition and the fifth centenary of the Netherlandish master’s death.

With its hallucinatory imagery, the central panel of Bosch’s most famous painting has nurtured endless theories about the artist who has been variously cast as a drug addict, a heretic and an astrologer. [Credit: Jheronimus Bosch, The Garden of Earthly Delights triptych, c. 1490-1500 © Museo Nacional del Prado, Madrid]

A giant rabbit wears clothes, an enormous duck drops fruit into a man’s open mouth, a naked man clutches a giant strawberry. Eroticism meets horror, the absurd becomes the monstrous, naked bodies cavort and endure in equal measure. Five centuries on, the extraordinary paintings of Jheronimus Bextraordinaryosch (1450-1516), continue to captivate and mystify audiences at Madrid’s Museo Nacional del Prado, known as the “home of Bosch” because of its unparalleled collection of works by the Netherlandish master. Joined last year by loans from museums including the National Gallery, London and the Albertina in Vienna, the six paintings in the Prado’s permanent collection formed the centrepiece of a historic exhibition marking the quincentenary of his death.

While Bosch was sufficiently attached to his home town that he adopted its name as his own, his paintings found a market much further afield and were particularly prized in 16th-century Spain. Some of his most famous works were collected by Philip II, forming the basis of the Prado’s remarkable collection today. Perhaps the most famous of Philip II’s acquisitions is The Garden of Earthly Delights triptych, c.1490-1500, a painting that never leaves Madrid and so could not be included in the first leg of last year’s celebrations in the artist’s home town of ‘s-Hertogenbosch.

The subsequent Prado exhibition is preserved in a 400 page publication of the same name, and marks the culmination of a 20-year programme of research and restoration work at the museum. Extensive technical analysis of the paintings in the Prado’s collection have yielded huge amounts of new information about Bosch’s methods and techniques, while the restorations of The Adoration of the Magi, c1494, and The Temptations of Saint Anthony, c.1510-15, have, according to the museum, afforded a better appreciation of these two great works.

The exhibition also presented an opportunity to take stock of Bosch scholarship, which has in the past-proved fertile ground for diverse and outlandish theories. Bizarre but sensual, scenes like the orgiastic central panel of Bosch’s The Garden of Earthly Delights gave rise to speculation amongst previous generations of scholars that the artist was a heretic, a drug addict, an alchemist, or an astrologer.

Today’s art historians have rejected these ideas, however, with current scholarship casting Bosch as a devout Christian whose paintings should be read as moralising entreaties to live well. Continuing a medieval tradition of depictions of the Last Judgement, Bosch’s paintings warn in the most graphic terms of the dire consequences of sin, and the appalling punishments meted out to souls condemned to eternal damnation.

Medieval imagery would have provided Bosch with a rich visual resource, and there is little doubt that he derived inspiration from the myriad of bizarre inventions found in illuminated manuscripts. In the 16th century, his paintings were often known as “dreams”, and certain features, such as the pink flesh-like buildings and man-size bubbles, seem likely to have been the fruit of his unique imagination. In fact, art historians have often commented on the debt owed to Bosch by the Surrealists.

Even so, Pilar Silva Maroto, the exhibition’s curator, writes that everyday life in the Market Square of ‘s-Hertogenbosch, where Bosch lived from the age of 12 until his death, afforded a surprising array of spectacles and experiences. From running simple errands, to witnessing the great fire that swept through the town in 1463, “Bosch had a privileged view of everything that happened in the square, and sometimes played an active part in events ranging from the everyday to the festive.” At the heart of the town, full of shops and stalls, musicians and petty thieves, the Market Square was also the venue for religious processions and festivals.

The activities of daily life, so easily recognisable even five centuries on, and the weird and often disturbing excesses of a wild imagination make a combination as irresistible now as it was in the days of Philip II, whose passion for Bosch would sow the seeds of a uniquely precious collection. 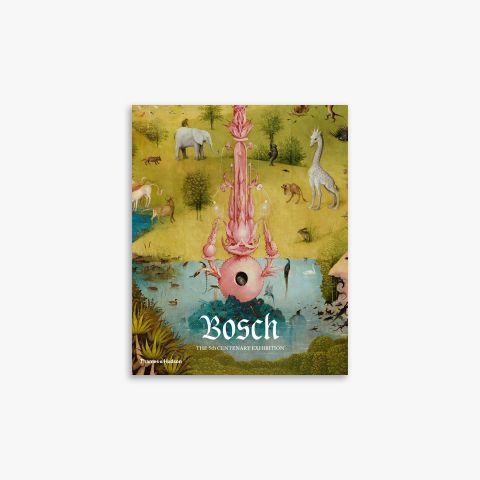 The 5th Centenary Exhibition Pilar Silva Maroto Out of stock
+