In an extract from his first career retrospective - which includes five thematic volumes of his work and an exclusive signed print - Noma Bar tells how the discovery of his favourite bookshop on Charing Cross Road contributed to his decision to move to London.

Noma Bar’s innovative, playful style has made him one of the most sought-after illustrators working today, with a broad range of commissions from magazines and newspapers – including Empire, the New York Times, Wired, the Guardian and Time Out – and numerous private and advertising clients. Bittersweet is his only career retrospective, five volumes of his work arranged thematically with a signed print created exclusively for this release. And to add to the excitement one copy of Bittersweet contains a one-of-a-kind gold-leaf print, allowing one lucky fan the chance to own a unique artwork by one of the world’s most inventive illustrators.

Below is an edited extract of Noma’s introduction to the first volume in the release, Less More, in which he explains his decision to move to London in the late nineties.

‘It was 1997. My girlfriend (now my wife) and I, both students, were hungry for information and knowledge. Escaping to London from our design college in Jerusalem, we went through endless independent bookshops in Charing Cross Road, looking for anything special, authentic or inspirational. After a while we discovered a shop called Zwemmer’s, which was heaven for graphic-design specialists like us. We had never before seen a whole shop dedicated to our discipline (in fact, it is still unusual), and we spent the rest of our trip there, reading, looking, sniffing and buying design books.

Through looking at those books I discovered the work of the great Alan Fletcher (1931–2006) – a big inspiration – and of many other British designers and architects. I was looking for books about typography, since I had become interested in Hebrew type design. The internet was in its infancy, and the knowledge was in bookshops like this. We felt Zwemmer’s was the sign that London was the right place for us, that there was a scene there, and so we vowed to move to the city as soon as we had graduated.

I soon found that there wasn’t a great demand for my Hebrew type portfolio in London. We were living in a small studio flat, with very little money, and earning a living using my main tools – type and language – looked more distant than ever. In an attempt to find a way forward, I made a few postcards and sent them to Alan Fletcher. Two days later I received a letter:

Noma Bar
I thank you for your cards. I like them. I will also post them. Actually I am not in a context to commission work as I work alone. Your time would be better spent seeing the Colour Supplements who should know about you.

I sent my postcards off and received a great response from the Guardian, Time Out and other national publications. As I worked on commissions, I made fascinating new visual discoveries and embraced new ideas. I didn’t want to spend time on decoration and unnecessary detail that would detract from the image’s message, so I made sure always to put the idea at the forefront, trying for maximum communication with minimal elements. As the sketches in Rough Smooth show, there is a very long way to be travelled between my initial idea or inspiration and a finished work for publication or exhibition, and that in itself is a great discipline.

Less More is a collection of fifteen years’ worth of personal and commissioned work, from screenprints, book jackets and magazine covers to posters and projects for the Victoria and Albert Museum, IBM, Volkswagen, Chineasy, the New York Times, Guardian, Wallpaper* and more. For some, such as Chineasy, I have been involved in something new and exciting from the start, and helped to shape it; for others, such as the V&A, I have been honoured to contribute to the visual history of something much older than me. I haven’t stopped working since my first commission, for Time Out, and although it can be difficult to balance professional demands with those of my family, I am constantly inspired and stimulated by the variety of commissions I receive and the ideas they produce.’ 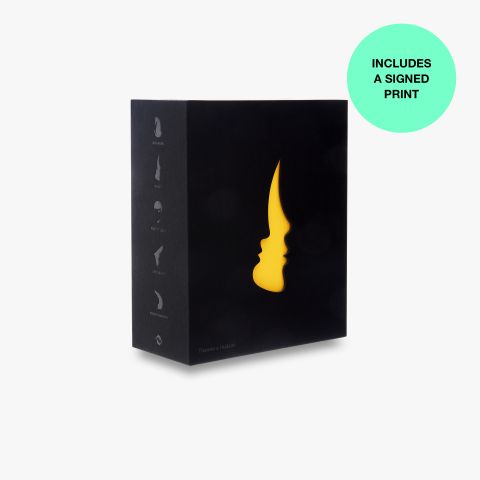