Article: How 3D Thinking Shaped Our Past and Will Shape Our Future

The development of 3D thinking begins with painted or carved Neolithic lines, circles and spirals and one wonders if these were simply expressions of the joy of moving one’s hands around with the added dimension of leaving tracks of iron oxide and carbon on a cave wall?

We know that many cave paintings were figurative and that this meant an artist of the Neolithic age would have formed a mental image of something seen, retained it in memory, and then reproduced it under flickering fire light in the depths of a cave. Such renderings transform something that is 3D into 2D – resulting in an amazing abstraction, a significant development in human conceptual thought.

Abstract patterns composed of straight lines date back some 70,000 years as can be seen carved on a stone found in the Blombos Cave of South Africa. Circles, possibly drawn some 15,000 years ago, decorate a wall in the Ojo Guareña cave in Spain. A 9,000 year old Mesolithic carving of a labyrinth appears as a petroglyph in Usgalimol, Goa, India. Maybe these line drawings were created because they were visually pleasing or physically expressive, but could they have been symbolic? And, if symbolic, were they designed to communicate, like an early script? Were they symbols that represented such things as the iris of an eye, the energy of a spiraling eddy in a storm driven river, the shape of a full moon. Were they representations that carried with them a meaning?

The layouts of many three-dimensional Neolithic structures are circular as can be seen at the Gobekli Tepe 9,000-year-old site in Turkey and at England’s 2,500 BCE Stonehenge. Many Neolithic passageways, pathways and alignments follow, more or less, strait lines such as the passageways of the 5,000 year old Newgrange tombs in Ireland, the ‘Avenue’ of England’s Stonehenge and the Carnac stones of Brittany erected some 6,000 years ago  – and many serve as lines of site that celebrate astronomical events that keep time with the cycles of the seasons. Whatever our interpretations are of Neolithic 2D and 3D designs they do represent a human disposition towards pattern, symmetry, simplification of form, abstraction and a desire to communicate.

A huge transformation in 3D thinking took place with beginnings of civilization in the valleys of the Nile, Indus, Euphrates, Tigris and Yellow but also along the banks of the Mississippi and Amazon. With civilization came the necessity to formalize and standardize many aspects of human existence. What was rectangular became a ‘rectangle’ with four quarter turn sides, what was circular became a ‘circle’ – a closed path equidistant from a center point. What was ‘relative’ time such as the cycles of the sun, moon and stars and the seasonal cycles of plants and the life cycles of animals became ‘calendar’ time. What were relative counts and measurements, “I have as many sheep as fingers on my hand,” became standardized measurements – the width of a particularPharaoh’s hand or thumb. Geometry was no longer the domain of pathways and relative directions but of set directions in three-dimensional space – of squares, cubes and cuboids – concepts that were applied to fired clay bricks, carved stones – or field boundaries that were swept away with each flood cycle. The sense of the ‘divine’ had also progressed in architecture from myth to formalized religion that, combined with symbolism, created a sort of divine geometric architecture composed of number ratios and the dimensions of the gods – proportioned within square and cubical grids upon which ideal human forms were mapped.

By the time of the ancient Greeks, number theory, such as the ratios of Pythagorean musical tones, combined with symbolism and the limitations of technology, materials, economy and convention, resulted in simply proportioned rectangular structures. As in ancient Egypt temples were no longer just shelters, they were gateways, portals to the divine – designed to resonate with spirituality. The classic example of all of this is the Parthenon, where a rectangular set of columns sits under a triangular tympanum 4 : 3. One enters through eight columns, passes through six and then is surrounded by four  – a ratio of 4 : 3 : 2. Number ratios abound within and about the Parthenon – some calculated with great liberty but all fall within square, rectangular, cubic and cuboid grids. Even the proportional ratios of ancient Greece, based on the ‘perfect’ human form and as recorded by the Roman engineer Vitruvius, are in simple whole number ratios based on square and cubical grids; 1 : 1; 1: 4; 1 : 8. In this time period designers and architects were in the world of Euclidean space and restricted by whole number ratios.

The Early Years of Islam

There was much two-dimensional innovation during the early years of Islam with some attempts to break out of the shell of ancient Greek and Roman conformity. New concepts of design and architecture were developed with space-filling concepts that anticipated fractals, vectors, non-periodic tilings and space frames. There were also new levels of communication through numerology, symbolism, perceptual effect and logic. A believer could now approach a place of spiritual enhancement and be impacted by symbolism at a distance, the profile of a dome for example. And then be challenged by the logic of the geometry of a surface design, be drawn into challenges of perception and symbolism, unravel number-word associations embedded within many surface designs, read tiled script and then witness the acoustical and light properties of faceted surfaces.

Early Islamic architectural structures were mostly derivatives of earlier Roman and Byzantium structures – with the exception of the development and applications of new types of arch, in particular the pointed arch that was to transform European architecture in the gothic period. There was innovation with regard to projecting two-dimensional surface designs onto domes and also with ‘sequence’ – meaning architecture that trafficked individuals through a series of experiences – gardens, fountains, courtyards, colonnades, surface designs, interior halls, areas for imams, and prayer areas.

“3D Thinking…” travels through time exploring the logic, designs and technologies of ages past through to the present and to the possible future. We now live in an age where whole number proportions no longer dominate architectural proportions – although creating within square, cube and cuboid grids is still pervasive. Ahead of us we have the possibility of applying new theories of space and time to architectural form using cutting edge technologies – where we can, at last, move away from creating designs within proportional grids and explore form more objectively – with the hope of creating architectural designs and spaces that will enhance the human experience. 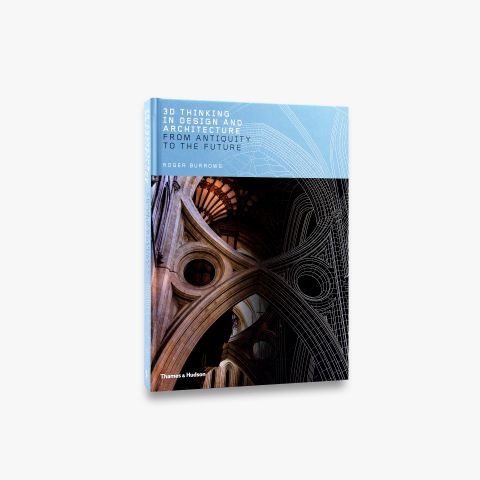 3D Thinking in Design and Architecture

From Antiquity to the Future Roger Burrows
£39.95
+